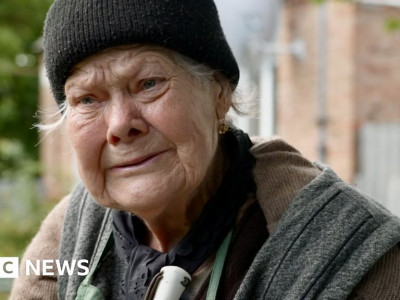 His body lay where he fell - alone, flat on his back, under a weak September sun. He was killed around noon on 24 September during hours of intense shelling in the city of Bakhmut in Ukraine's eastern Donbas region. We came across him by chance, and learned later than his name was Andriy Yablonsky, and he was 52. A woman in a red coat screamed in anguish nearby, as she sheltered in a doorway. This was Andriy's sister. "What should I do for my brother?" she wailed. For more than an hour he couldn't be moved because there was no let-up in the barrage. Andriy's life was spent saving others. He worked as an ambulance driver and was killed not far from his depot - his body punctured by shrapnel. His name has now been added to the list of Russia's victims in Bakhmut. More than 70 civilians have been killed by enemy shelling in recent months, according to the local governor Pavlo Kyrylenko. We probably heard the shell that killed Andriy. For hours that morning the city centre echoed to the whistle and deafening shriek of incoming shells from Russian forces, and the thud of outgoing rounds from the Ukrainians. An artillery duel was playing out around us - the retorts so fast it was hard to keep track. "It's like badminton," a Ukrainian colleague said. A dozen civilians huddled by a wall, ducking and flinching, as one explosion followed another. Their prize possessions were stuffed into travel bags at their feet. They were waiting for a one-man evacuation team to get them out of the city. Before the Russian invasion in February, Bakhmut was home to around 70,000 people, and was known for its salt mines and sparkling wine production. Now it is battered, and largely lifeless. Iryna - a 48-year-old in a bright yellow jacket - kept watch nervously over her 14-year-old daughter Yelizeveta - who seemed to sink into her hoodie. Mother and daughter sometimes flinched in unison at the sounds of battle. Otherwise, the teenager busied herself with a pet carrier. Iryna's reluctant departure from her hometown was for the sake of her child. "It's very hard," she told me, "very difficult. I wouldn't want to leave this place except for the war. The main thing is to save the life of my daughter. We are also taking our cat with us, who has had kittens, so that we all survive." And will she be able to come back some day? "I want to return to Bakhmut," she replied. "Our armed forces will take the territories back and everything will be alright." This statement is both a prayer and an article of faith for many in Ukraine. More than six months into the invasion, Russia's stated aim - repeated recently by President Putin - is to gain control of all of Donbas. Bakhmut is a stumbling block. Russian forces could use a victory here after their recent humiliating defeats in north-eastern Ukraine. For now, Ukrainian troops are holding them off at the eastern edge of this strategic city. However the battle for Bakhmut may end, Iryna and Yelizeveta have a more immediate worry - surviving to the end of the day. They gather up their belongings hurriedly and scramble into the back of a van, driven by a volunteer called Serhiy Ivanov. The 39-year-old - who wears a helmet and sunglasses - used to be a drummer in a rock band. These days he is part of a network called 'Rescue Now' and seems fuelled by adrenaline. A tattoo in Latin on his right arms reads "carpe diem", or "seize the day". For months now he's been doing just that, snatching civilians from harm's way in front-line areas. He plays down the risk to his life on these daily missions. "I think it's usual for me," he says "and usual for any Ukrainian. I feel happy when I see smiles on these faces. I love life, I love Ukraine and I love people." With that he sets off at speed along bumpy back roads. For Iryna and her daughter it's the first stage of a journey to the relative safety of the capital, Kyiv. Others choose to remain in this city, prisoners of age and memory like 80-year-old Lidiya who we met across town. The brutality of war is staring her in the face. Her modest home is opposite from a blackened five-story apartment block ripped asunder by a Russian airstrike on 15 September. Five civilians were killed in the attack, according to the emergency services. As they searched in the rubble the next day one of their team was killed by shelling. Lidiya sits on a bench in front of her home, bent over her walking stick. She is bundled up in cardigans and wears a black woollen hat. Her tears come quickly once we start to speak. She is mourning Volodymyr, her husband of 60 years who died recently through illness, and the peace they used to enjoy. "For 70 years, there wasn't any war. Why did they start it? What are they fighting for? I want to cry days and night," she tells me. "I ask my husband to take me. My children have been evacuated. Their life has been ruined, too. And the little children have been evacuated. They are torturing us, 100%." Lidiya rails at both sides, her words punctuated by shelling. "What a winter it will be," she sighs. "No gas, in a cold house. I would happily go hungry if only they stop the shelling." As we left Bakhmut, smoke was still rising after a Russian airstrike a few days earlier on another apartment block. There were ashes smouldering in the rubble. In its bid to take the city, Russia seems ready to destroy it. It's a pattern we have read in other ruins in other Ukrainian cities. Shell, kill, and repeat - the Russian army way.
Read full news…
More news