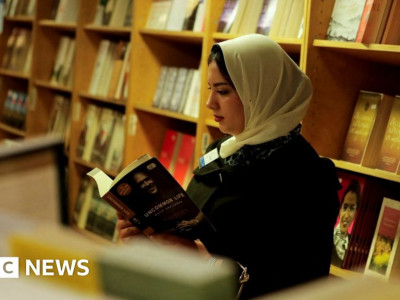 Egyptians are used to paying for costly items such as cars or washing machines in instalments, but rocketing inflation means they can now buy books this way.

"A book has become a luxury item here in Egypt. It's not a basic commodity like food and people are saving on luxuries," says Mohammed El-Baaly of Sefsafa Publishing House.

He was speaking as the Cairo International Book Fair, which last year attracted two million people, opens to the public.

With book prices more than doubling, some Egyptian authors say they have cut back on characters and descriptions to be more economical in their writing.

"The cost of paper and ink has gone up tremendously," Mr El-Baaly says. "The cost of a tonne of paper is now nearly four times higher than at the start of the year!"

He says he has turned to printing books overseas and is producing fewer copies, as he expects falling demand.

It was the fear of a drop in numbers of shoppers at this year's book fair - the oldest and largest of its kind in the Arab world and a major event for the publishing industry - which led to the idea of paying in instalments.

The Egyptian Publishers Association says customers can now choose to take up to nine months to buy a book, paying 1.5% interest.

Author Dina Afifi, who writes popular fiction for teens, is hoping the scheme will boost flagging sales. She says the appearance of her latest book about pharaohs was changed to lower the cost of production.

"My book's been downsized, slimmed down to just 60 pages from around 100, because of the rising printing costs," she told the BBC.

Some Egyptian novelists have described ways they have stripped back their writing to produce shorter books - simplifying storylines by introducing fewer minor characters and limiting the amount of description.

They complain that more Egyptian readers are now buying counterfeit copies of books of low quality. These are sold at stalls on the streets for prices ranging between 50 and 100 Egyptian pounds ($1.67-3.35; £1.36-2.70).

In recent months, accelerating inflation has slashed the spending power of Egyptians who had already endured years of austerity and recurring economic shocks.

Egypt - which relies heavily on foreign imports - has suffered from a currency crisis. After successive devaluations, money is worth half of what it was a year ago.

The government says it is doing what it can to bring down prices and blames the strain on external factors linked to the war in Ukraine.

One Egyptian poet said it was unsurprising that this year, ordinary people were more worried about putting food on the table than buying books, which would nourish their minds.