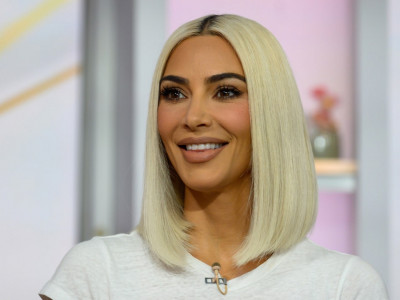 Sometimes, it's the seemingly subtle looks that turn the most heads. Such is the case with Kim Kardashian's latest updo, a bun-ponytail hybrid that exudes effortless cool. From the front row at Fendi to the streets of NYC, Kardashian's latest look pulls focus to the deep roots of her grown-out peroxide lengths — which is kind of the point.

"A bun can look quite serious — this one is less done," says hairstylist Chris Appleton, who calls the updo the wet-look flip bun. For this hybrid hairstyle, Appleton brushes Kardashian's white-blonde hair back for the slicked-back hairdo that doesn't have a strand out of place. The style's "wet look" makes it appear as if Appleton created the style on freshly washed, towel-dried hair.

The reality TV star's sleek hair is then styled into the half-ponytail, half-bun look right in the middle of the back of her head. Appleton adds that, though the style does appear effortless, the positioning is key. "Kim's usual low bun tends to be lower, while this one follows the eye line… it snatches the eye." The look is strongest when combined with a bit of extra texture, achieved by Appleton through a finger-rake rather than the usual super-slicked finish. Her dark brunette roots contrast with her platinum hair color which gives the style an added edge.

The midi knot ushers in a new era for Kardashian, a quiet elevation of her signature aesthetic. In this case, it turns out that understated makes a major statement. "It's funny how many people have stopped me about this," laughs Appleton.

This story originally appeared on vogue.com.

Now enjoy this cosmetic surgeon's daily routine, from the moment she wakes up: