Rosalía and Bella Hadid Linked Up In Some Very Y2K Hairstyles 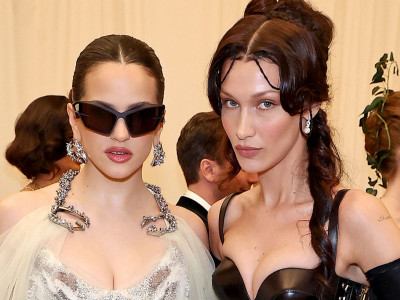 Fresh off New York Fashion Week, Bella Hadid made her way to the Radio City Music Hall to join Spanish artist Rosalía on the second sold-out concert of her Motomami world tour. Up for nine Latin Grammy award nominations, the flamenco singer left her musical mark even on the New York City sidewalk as fans sang her lyrics in harmony at the front entrance of the concert hall.

Rosalía, known for infusing her flamenco roots with reggaetón, bachata, and pop music, shared a nine-photo gallery by way of Instagram on Monday, September 20. In the seventh photo, Hadid showered the artist with congratulatory hugs backstage. Both of the brunettes gave a nod to the Y2K era with their very eccentric hairstyles.

Hadid wore a zigzag headband (yes, those are back with a vengeance in the present day) while Rosalía sported three vertically aligned, slicked-back space buns that fell down along the back of her head. Intertwined in each bun were red streaks of extensions. Hadid, seemingly wearing a braided bun, flaunted two left-out micro braids streaming down to her shoulders.

This content can also be viewed on the site it originates from.

"Today I woke up extremely happy. Thank you for the nine Latin Grammy nominations and for the two sold-out shows I've enjoyed so much at the Radio City Hall. New York is the most incredible city in the world. Thank you for the love," the artist wrote in Spanish.

All the love was absolutely present as these two stars — elated with energy — sported distinct yet similar in-trend hairstyles.

More on beauty and wellness from Allure editors: