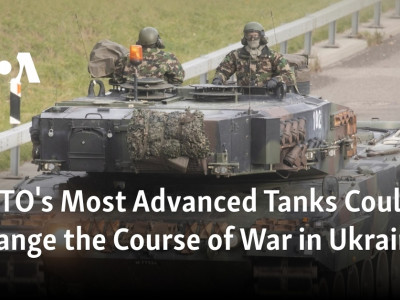 The United States and Germany have both reportedly decided to supply Ukraine with state-of-the-art main battle tanks, weapons systems that could dramatically shift the balance of power on the battlefield as Ukraine fights off a Russian invasion.

With the U.S. and Germany both committing tanks to Ukraine, the door will open to other NATO-aligned powers in Europe, more than a dozen of which use the advanced German Leopard 2 tank, to also transfer the heavy weapons to Ukraine.

VOA on Tuesday confirmed that the U.S. will supply Ukraine with dozens of advanced M1 Abrams tanks, which are far less common in Europe.

If Ukraine is able to bring significant numbers of advanced tanks to bear, experts told VOA, it could have a major impact on its efforts to drive Russian forces out of the approximately 20% of Ukrainian territory that remains occupied nearly a year after the launch of Russia's full-scale invasion.

Germany had been under extraordinary pressure from other European nations to permit countries that have purchased its Leopard tanks to give them to Ukraine, a move that would otherwise have been barred by export-control laws. Earlier this month, officials in Berlin said that they would provide Leopards to Ukraine only if the U.S. provided the M1 Abrams.

The M1 Abrams and the Leopard 2 are both considered "main battle tanks," which signifies that they can play multiple roles on the modern battlefield. Experts told VOA that they are two of only three models of tank that rank as the most advanced in the arsenals of the U.S. and its NATO allies, the other being the British-made Challenger 2.

While any of those three systems would give Ukraine a powerful boost on the battlefield, supplying and maintaining Leopard 2 tanks may be simplest from a logistical point of view, given their wide distribution across the continent. The M1-Abrams, while arguably the most advanced of the three, poses particular maintenance challenges because it is powered by a jet-like turbine engine requiring special fuel and repair skills, whereas the Leopard uses a simpler diesel engine.

The Leopard 2 first came into service in 1979 but has been upgraded many times since then. It comes in multiple variants, but in general, the tank is about 10 meters long and 3.75 meters wide, and weighs well over 60 metric tons. Its main gun fires extremely powerful 120 millimeter shells. It also carries two 7.62 mm machine guns, one mounted coaxially with the main weapon and another able to be angled upward, to engage aircraft.

The M1 Abrams is slightly newer, and carries similar weapons systems. It is also somewhat heavier than the Leopard 2 and has more advanced armor.

Both tanks are very heavily armored, providing excellent protection for crew members. Importantly, they have storage for ammunition that is separated from the crew compartment, a safety feature that many Russian tanks lack and which has contributed to the large number of invading tanks that Ukrainian forces have been able to destroy or disable.

Ukraine's need for tanks has become more apparent in the past several months, as the war has moved into a markedly different phase. In the late summer and early fall, Ukraine was able to mount a series of sweeping counterattacks, outmaneuvering Russian forces and forcing them back to the east.

Andrew Metrick, a fellow in the Defense Program at the Center for a New American Security, told VOA that tanks could help remedy that problem.

"It's about restoring the ability for operational maneuver by Ukrainian armed forces," he said. "It's creating forces that break through entrenched Russian positions and allow them to exploit superior firepower and mobility to roll up the Russian forces.”

John Spencer, chair of Urban Warfare Studies at the Madison Policy Forum, told VOA that for Ukraine to push Russia out of those positions, it will need a "combined arms" effort that coordinates infantry, artillery, air support and, above all, tanks.

"Without main battle tanks — and lots of them — Ukraine is very hampered in its ability to [attack] defensive positions that the Russians have been building everywhere," he said.

Spencer, who served as a U.S. Army tank commander during the war in Iraq, said that while Ukraine has some other armor, including U.S.-made Bradley Fighting Vehicles, none of it has the same capability as a main battle tank.

"The Bradley is much more thinly armored and has a lot less firepower," he said. "It can't break up defensive lines." Tanks, he said, were "created to lead the way through a defensive line."

Ukrainian officials have been pleading for advanced tanks for months, and were rewarded last week with the news that the United Kingdom would provide more than a dozen of its advanced Challenger 2 tanks — a move that many hoped would spur immediate action from Germany. When that did not happen, Ukrainian Deputy Foreign Minister Andriy Melnyk said it caused "huge disappointment for all Ukrainians."

Germany has been extremely reluctant to supply Ukraine with tanks, which are primarily an offensive weapon. In the earlier stages of the war, the majority of weapons supplied to Ukraine by Western powers, including Germany, could be classified as defensive, and were considered less likely to provoke an escalation by Russian President Vladimir Putin.

Spencer, of the Madison Policy Forum, told VOA that in order to have a real impact on the war, Ukraine would need to be given hundreds of main battle tanks, along with necessary support. Ideally, tanks move forward in concert with mechanized infantry, transported to the battlefield in vehicles like the Bradley, and backed by artillery and air power.

It remains unclear how many of each sort of tank will actually make it to Ukraine. While there are more than 2,000 Leopard 2s deployed across multiple countries in Europe, there are not nearly as many M1 Abrams tanks.

There are also some uncommitted tanks available. On Tuesday, the defense company Rheinmetall told German news organization RedaktionsNetzwerk Deutschland that it could supply up to 139 Leopard tanks, but the majority of those, 88, would be an older Leopard 1 model.