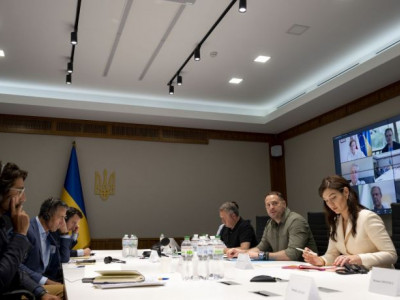 The international working group on sanctions against Russia chaired by Head of the Office of the President of Ukraine Andriy Yermak and Director of the Freeman Spogli Institute for International Studies (FSI), Ambassador Michael McFaul developed a new document “Measures to Increase the Effectiveness of Sanctions”. It specifies ways of circumventing the sanctions imposed on Russia and contains a call to increase the systemic character of sanctions restrictions.

In particular, it is proposed to create a unified list of sanctions, a list of offenders, a watch list of high-risk companies and individuals, a traffic light system to assess a country’s compliance with the sanctions regime, carry out monitoring of data on Russian trade and improve data sharing between allies.

It is noted that the sanctions against Russia have a great impact on its economy: the withdrawal of most Western companies from Russia, the destruction of entire sectors of the economy and production, the freezing of half of Russia’s international reserves and the inevitable loss of the key European markets for Russian oil and gas. However, the disastrous impact of the sanctions on the Russian economy has been mitigated by high oil and gas prices, as well as the existing exemptions and loopholes that allow them to be circumvented. Some loopholes are constantly being revealed and closed, including thanks to media attention and expert research. In addition, the document proposes a more systematic approach to establishing limits for managing and regulating economic relations with Russia – the “Cold War 2.0” approach. This may involve the introduction of a special trade regime with the Russian Federation in order to minimize trade and block access to Western technologies, markets and finance until the transition to a peaceful foreign policy.

“This is another collective product of the working group, which has a real applied effect: all specific companies, sanctions circumvention schemes, conclusions specified in the document are already being worked out by our partners. We insist on strengthening the sanctions pressure and on introducing the most systemic restrictive approach to the regime of interaction with the terrorist country,” Andriy Yermak said.

The report is structured around three main sectors: financial, energy sanctions, and the military-industrial complex.

In the financial sphere, intermediaries are used to conceal the ultimate beneficiaries of funds, as well as to introduce additional measures to avoid sanctions. For example, the Russian oligarch Melnichenko transferred ownership of the Swiss company EuroChem to his wife the day before the EU imposed sanctions on him. Similarly, the Russian oligarch Usmanov transferred considerable assets to one of his sisters, Saodat Narzieva, an obstetrician from Tashkent.

Oil of Russian origin is blended with oil of another country until the non-Russian component exceeds a threshold level at which point that oil is no longer classified as Russian oil. It is also been alleged Russia is building up a “shadow fleet” of tankers to evade current and forthcoming oil sanctions.

The tanker fleet of Volga Shipping company, owned by Mr. Lisin – a leading Russian oligarch who has so far only been sanctioned by Australia – has been involved in shipping oil or oil products from Russian ports to a transshipment point 20 nautical miles off them.

The document calls on Western economies to adopt more consistent and comprehensive sanctions, particularly on military enterprises, and to improve the wording of sanctions to close the loopholes that allow such trade. The introduction of sectoral sanctions on all trade in military products with Russia, with the application of sanctions separately to all legal entities of the Russian military-industrial complex and their trading partners. Sanctions that apply to the UBO and controller of assets should also apply to any nominee who has obtained formal ownership of assets as part of a sanctions evasion strategy.

Last but not least, the group proposes that the sanctions coalition draw up a list of violators (“blacklist”) of oil transporters, traders, financiers, insurers and technical transport service providers who helped Russia evade the oil embargo.