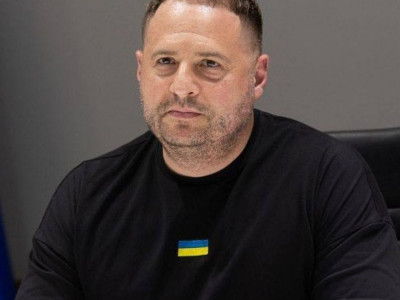 Ukraine needs reliable security guarantees, an important component of which is the security of the skies and effective air defense, Head of the President's Office Andriy Yermak said during a videoconference meeting of the Ukraine-NATO Commission.

"Ukraine presented the concept of Kyiv Security Treaty with our proposals for security guarantees. Our proposals are aimed at mobilizing the necessary political, financial, military and diplomatic resources for the self-defense of Ukraine. These guarantees should protect the sovereignty and territorial integrity of Ukraine and make new aggression impossible in the future," Yermak said.

According to him, the working principle of guarantees is simple: the security of Ukraine depends, first of all, on its ability to defend itself. And the effective defense of the state depends on the contributions of its allies.

"Kyiv Security Treaty suggests that this should be a joint document on a strategic partnership between Ukraine and the guarantor states. These obligations must be reliable, since we cannot agree to a new list of non-binding assurances like the infamous Budapest Memorandum," Yermak said.

He also said the air defense and missile defense system of Ukraine can be integrated with the systems of NATO and Europe. Yermak recalled that at the end of September, President of Ukraine Volodymyr Zelensky, together with the Chairman of the Ukrainian Parliament and the Prime Minister, submitted an official application for Ukraine's membership in NATO. This application means that Ukraine once and for all rejected the option of neutrality or non-bloc status. This is also a requirement of the Ukrainian society, because about 90% of Ukrainians support joining the Alliance.

"We believe that soon Ukraine will be ready to start the accession process, skipping the MAP in terms of meeting the standards of the Alliance and the level of interoperability. We suggest that Ukraine, as a unique partner of the Alliance in a very special security situation, will have its own reasonable path to NATO membership," Yermak said.

In addition, he focused on the importance of creating a special tribunal for the crime of aggression against Ukraine committed by the Russian leadership.

"We are grateful to the NATO Parliamentary Assembly for supporting the creation of a special tribunal. We call on our partners, in particular the Alliance and its members, to take part in consultations on an international treaty and its creation. Ukraine has prepared relevant draft documents that could become the basis for further work on the creation special tribunal," the head of the President's Office said.

He said the peace formula proposed by President Zelensky contains ten points: radiation and nuclear security, food security, energy security, the release of all prisoners and deportees, the restoration of the territorial integrity of Ukraine, the withdrawal of Russian troops and the cessation of hostilities, justice, urgent protection of the environment from ecocide, preventing escalation and confirming the end of the war.