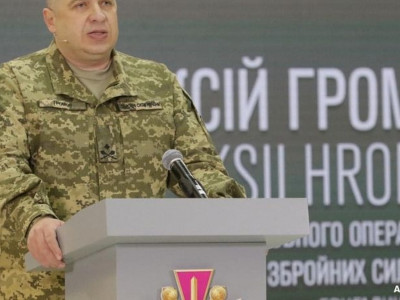 The so-called "escalation of the situation" is possible on the Russian-Ukrainian border on November 23-28, Russia is preparing its troops for this, Deputy Chief of the Main Operational Directorate of the General Staff of the Armed Forces of Ukraine (AFU), Brigadier General Oleksiy Hromov said.

"The enemy is spreading information and preparing its troops for the so-called possible escalation of the situation on the Russian-Ukrainian border on November 23-28. It expects that NATO and Ukraine would want to occupy border areas of peace-living Belarus and Russia. This is reminiscent of the scenario of the exercises already conducted by Belarus in September this year," he told a press briefing at the Military Media Center on Thursday.

According to Hromov, against this background, the Russian occupation forces, which are deployed in Belgorod region, have been ordered to install mine-explosive barriers within their areas of responsibility in order to prevent the penetration of sabotage and reconnaissance groups of the Ukrainian defense forces into the territory of Russia. Hromov also said that, the enemy is taking measures to check the condition of weapons and military equipment for combat use and training of combat crews, working out the order of military operations.

"Taking into account this information, it would be a mistake to rule out a possibility of any enemy provocations on the border," he said.

Hromov also said that only reconnaissance and demonstration actions were noticed on the part of Belarus, primarily the movement of troops. Meanwhile, from the territory of Russia, the enemy did not stop the criminal practice of shelling the Ukrainian border.