Russia Has Been Killing Ukrainian Civilians for 9 Months: the Worst Strikes by the Invaders 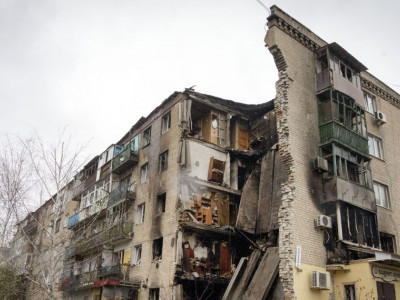 According to the UN data, since the beginning of the large-scale military invasion, Russia has killed over 6,500 civilians in Ukraine. These numbers are not final and are constantly increasing as the aggressor country continues to kill Ukrainians, destroy civilian infrastructure, and wipe villages and towns off the face of the earth day after days.

Thus, during the last night alone, the invaders launched a missile strike on the maternity ward at the central district hospital in Vilniansk, Zaporizhzhia region, where a newborn baby was killed.

After the events in Volniansk, TSN.ua has gathered details about the most horrible terrorist attacks of the Russia invasion forces against peaceful Ukrainians.

In the early hours of November 23rd, the Russian invasion army attacked the maternity ward at the Volniansk hospital, Zaporizhia region, with S-300 missiles, killing a newborn boy, who was only two days old. The rescuers retrieved the victim’s body from the collapsed building wreckage. The mother of the newborn child survived. Two healthcare professional were injured. One of them suffered burns of 37% of body surface area.

The Ukraine’s Presidential Office issued a statement following the maternity hospital strike and assured that the invaders would eventually face maximum retribution.

"If I could afford certain words in communications, I would write a little differently about these terrorists, but I will only say one thing - these animals will face maximum payback and will be held accountable for every Ukrainian life they’ve ended", Andrii Yermak, the Head of Ukraine’s Presidential Office, stressed.

Along with other towns and villages in the region, the city of Zaporizhzhya is often targeted by Russian artillery.

For example, on the morning of September 30th, Russian troops attacked a humanitarian convoy southeast of Zaporizhzhia. On October 8th, 32 fatal casualties were confirmed as a result of the attack. According to Oleksandr Starukh, the Head of the Zaporizhzhia Regional Military Administration, 16 missiles were fired by the invaders that morning. Four of them were shot down by Ukrainian air defense units, while nine hit a commercial enterprise, where the staff managed to avoid the injuries. The last three missiles hit a humanitarian convoy. Starukh stressed that it was a clearly planned massacre. After all, three missiles landed was along the entire column: at the beginning, at the middle and at the end.

On the morning of October 6th, Zaporizhzhia came under attack again. The enemy launched about seven strikes. The missile shit residential houses, and the fire started in the city. People were trapped under the rubble. There were nineteen confirmed casualties in this attack.

On October 7th, the invaders attacked Zaporizhia with Iranian-made kamikaze drones, which hit critical infrastructure facilities in the city. According to local authorities, one of the drones landed in the yard of an apartment building. Fourteen people were killed.

On October 9th, Russian invaders fired 12 missiles at Zaporizhzhia, and almost all of them landed in the residential neighborhoods. Twelve people were killed and 49 civilians, including children, were injured in the attack. A nine-story apartment block partially collapsed, and five more private houses were destroyed. The missiles also damaged infrastructure facilities and 20 civilian vehicles.

On October 1st, the bomb-mangled remains of a convoy of passenger cars, in which local civilians attempted to flee the area, was discovered in the Kupiansk District near the village of Kurylivka, Kharkiv Region. A total of 24 people became victims of the terrorist attack perpetrated by Russia. Among the victims was a pregnant woman and 13 children.

On September 30th, Russia launched a missile attack on Zaporizhzhya, when a total of 16 missiles were fired. Some missiles hit a convoy of civilian vehicles waiting in line to leave the city for the temporarily seized territory. Over 30 people were killed, including two children, and about a hundred were wounded. Among the dead was a 36-year-old employee of the local Department of Strategic Investigations of the National Police. Another 27 police officers were injured.

On August 24, Ukrainian President Volodymyr Zelensky reported a strike at the Chaplyno railway station. Initially 15 dead and 50 wounded were reported. However, on August 25ер, the death toll rose to 25, including three children.

The Russian strike in Chaplyno cut short the lives of a displaced couple from the Donetsk Region, who were driving by the railway station in their car during the attack. Their minor child was left orphaned.

On August 4, Russian soldiers shelled a public bus stop in Toretsk, Donetsk Region. As a result of attack, eight people were killed and four were wounded, including three children. A total of seven civilians were killed in the region as a result of Russian shelling on that day. Nine more local civilians suffered injuries.

Vinnytsia missile strike was reported around 11:00 a.m. on July 14th, when the Russian troops bombed the office building in the downtown. Three missiles launched by the Russian terrorists hit the civilian district.

At least 28 people were killed as a result of this strike, including four-year-old girl, Liza, with Down syndrome. She died on the spot, and her mother Iryna was taken to intensive care unit in critical condition.

The Ukrainian military and political leadership called the Vinnitsa strike an overt act of terrorism, and Ukrainian Foreign Minister Dmytro Kuleba promised that all Russian war criminals would be brought to justice.

In the early hours of July 1st, the inavders launched a missile attack on the resort village of Serhiivka in Odesa Region. A nine-story apartment building and two recreation center buildings were destroyed. As a result, 22 people were killed, including a child, and over 40 civilians were injured.

One of the highest civilian death toll was documented for a Russian strike targeting an apartment buildings in the town of Chasiv Yar, Bakhmut District, Donetsk Region. The towns with pre-war population of over 10,000 people as hit in the evening of July 9th. According to Ukrainian authorities, Russia attacked Chasiv Yar with Iskander missiles. The missile hit a residential buildings causing them to collapse. Forty-eight bodies were retrieved from under the rubble, including a 9-year-old boy who died with his mother.

On June 27th, Russian invasion troops launched a missile attack on the city of Kremenchuk, Poltava Region, where Amstor shopping mall was hit. As a result of the attack, at least 20 people were killed, almost 60 civilians were injured and over 40 person were reported missing.

The entire shopping mall building was destroyed in the explosion. The missile was launched from a Tu-22MZ bomber jets taking off from Shaykovka airfield in the Kaluga region of Russia.

The Russian Defense Ministry claimed that the missile hit the hangars with weapons supplied by the EU and the US. According to Russia’s statement, the missile allegedly hit Kremenchug Road Machinery Plant, but the detonation of the ammunition caused a fire at the mall, which, according to Russian authorities, was supposed to be closed.

In early May, the Russian military dropped an aircraft bomb on a school building in the village of Bilohorivka, Luhansk Region, where 90 people were hiding. According to preliminary data, over 60 civilians were killed in the explosion.

On April 23, Russian troops launched missile strikes targeting an apartment block in the Kyivskyi District of Odesa. The enemy missile destroyed the residential apartment between the 2nd and 5th floors. All exits from the building were blocked, and people were trapped inside. A fire broke out as a result of explosion. Nearby houses and cars were damaged. According to preliminary reports, eight civilians were killed, including a 3-month-old baby. Over 18 people suffered injuries.

An entire family with three generations of women: grandmother Liuda, young mother Valeria, and her 3-month-old daughter Kira, were killed in the Russian missile attack on Odesa.

On April 8, the Russian Federation attacked crowded train station in Kramatorsk. The Russian missile hit the station killing 61 people, including multiple children. The SSU experts examined the crash site and confirmed that the missile was launched from the Russia-controlled territory.

The train station was attacked using the guided Tochka-U. As the Security Service of Ukraine later reported, the missiles was fired from the territory of Donetsk Region, which has been seized by Russia back in 2014.

On March 9, Russian invasion troops shelled Maternity Hospital No. 2, which housed infants, women in labor, and pregnant women. Three people were killed, including a child. Seventeen people were wounded. Russian Foreign Minister Sergey Lavrov later confirmed that the maternity hospital was shelled by Russians, but claimed that there were no pregnant women there, since the building was used as a headquarters of Azov Battalion.

On March 16th, Russian air forces dropped a heavy aircraft bomb on a drama theater in the downtown of Mariupol. Mariupol residents who had lost their homes due to Russian army shelling were hiding in the building.

About 300 people were killed in the bombing, according to Mariupol City.

About 600 people were staying in the theater durinf the attack, and over 300 were hiding in the shelter in theater basement.

"Those who were in the theater ground floor were killed. There were around 300 civilians, including pregnant women and children," Lyudmila