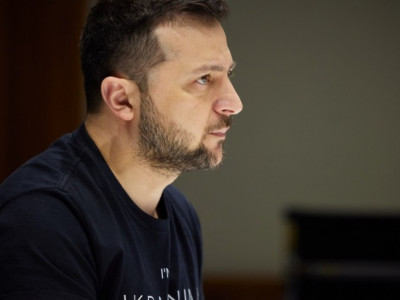 President of Ukraine Volodymyr Zelensky gas called on the OSCE to become a leader in the fight against Russian terror and "co-creator of peace" on the European continent.

"I urge you to do everything possible so that the Organization for Security and Cooperation in Europe becomes a co-creator of the victory over Russian terror, and therefore a co-creator of peace on our continent. I am grateful for the principled Presidency of the Assembly and for the conscientious work in the committees and at the level of national delegations – for all that serves to protect our values and helps isolate Russia for terror. And I urge to extend this principledness and conscientiousness to the procedural architecture of the Assembly and to the OSCE in general. The time has come for this reform!" he said, addressing the OSCE Parliamentary Assembly via a video linkup on Thursday.

We see "various international platforms finding the necessary solutions to help stop Russian terror, isolate the terrorist state as much as possible, and find a way out of the brutal global crises created by Russia", the head of state said.

"But why is there still no OSCE among these platforms? Why, in particular, is a terrorist state even after nine months of its continuous crimes still a member of your Parliamentary Assembly?" Zelensky said.

He welcomed Poland's refusal to issue visas for the Russian delegation.

"If it was not for the Polish decision regarding visas for the Russian delegation, for which I am grateful to Poland, grateful to the representatives of the Polish Sejm, the government, and also the President, so if it was not for this, the representatives of the terrorist state could be among you today. This fact is an open mockery of all the principles on the basis of which the OSCE was created," he said.

Zelensky described the Russian war of aggression against Ukraine as "a test for nay international organization."

"Russia does not read letters about peace and does not listen to statements about the Helsinki principles. Russia does not consider the presence of any Council in Europe as a value. Russia does not respect the Red Cross and will not obey just because some organization has been working for over a hundred years," the president said.

He urged the OSCE PA "not to wait for winter, spring or summer to finally remove even the hypothetical possibility for supporters of terror to participate in any activity of your parliamentary assembly."

"I urge you to do everything you can to ensure that the OSCE is among those who are truly able to stop terror and help bring Russian murderers and torturers to justice," the President of Ukraine said.