Zelensky speaks at Grammies: Tell the truth about war 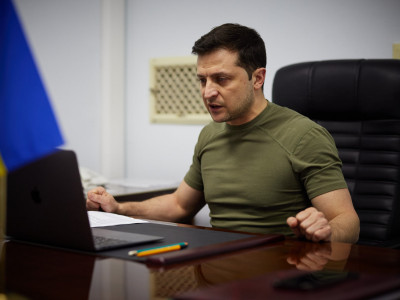 Ukrainian President Volodymyr Zelensky has made a video address at the 64th annual Grammy Awards early on Monday, April 4.That's according to CNN, Ukrinform reports."Our musicians wear body armor instead of tuxedos. They sing to the wounded. In hospitals. The war doesn't let us choose who survives and who stays in eternal silence," Zelensky said.He noted that more than 400 children were injured and 153 children died, and "we will never see them drawing."He urged musicians not to be silent, but to talk about the Russian-Ukrainian war through all possible channels of communication."Tell the truth about war. On your social networks. On TV. Support us in any way you can. Any. But not silence. And then peace will come. To all our cities the war is destroying. Chernihiv, Kharkiv, Volnovakha, Mariupol and others. They are legends already. But I have a dream of them living. And free. Free like you on the Grammy stage," Zelensky urged.His speech was followed by a performance of "Free" by singer John Legend, who as joined by Ukrainian artists Mika Newton, Lyuba Yakimchuk and Siuzanna Igidan.On February 24, Russian President Vladimir Putin announced the beginning of a full-scale invasion of Ukraine. Russian troops have been shelling and destroying critical infrastructure and residential areas of Ukrainian cities, towns and villages using artillery, multiple rocket launchers and ballistic missiles.
Read full news…
More news
More news