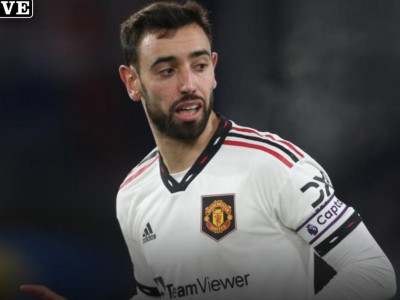 THE CITY GROUND, NOTTINGHAM — A place in the Carabao Cup final at Wembley Stadium on February 26 awaits either Nottingham Forest or Manchester United, as they gear up for a semifinal battle.

Forest welcome United to the City Ground for tonight's first-leg clash, with Steve Cooper looking to build on the hosts' positive momentum in the Premier League, while Erik ten Hag is aiming for a first trophy as United boss.

United won the competition under Jose Mourinho back in 2017 — their last major domestic silverware — and Ten Hag has insisted the trophy drought at Old Trafford has gone on "too long".

The Sporting News is following the match, providing live score updates and commentary from the City Ground.

8th min: Antony - who needs a big performance after recent criticism - goes narrowly wide, with his left-footed effort cutting in from the right. Ten Hag's men looking in the mood.

6th min: GOAL! Rashford simply cannot be stopped! A wonderful goal as the England international breaks down the left wing, starting in his own half. He gets between two Forest defenders, who don't know whether to lunge in or not, and finishes well with his left foot at the near post. 1-0 to United.

3rd min: The City Ground has been loud all season, but it seems to be reaching new levels tonight with a great atmosphere here. United have settled into possession slightly better, as expected.

15 mins to KO: For United, this competition represents a huge chance to end a run of six semi-final appearances without lifting silverware.

Two semi-final exits came in the Carabao Cup in 2019/20 and 2020/21, under Ole Gunnar Solskjaer. The former also saw them reach the final four of the FA Cup and UEFA Europa League without success, while the latter campaign featured a final defeat in Europe. The Red Devils also lost the FA Cup final in 2017/18.

30 mins to KO: Forest fans have fond memories of the League Cup, though their last appearance in a final came in 1991/92 — a defeat to United, coincidentally.

That marked the sixth time they had reached the showpiece occasion in a 15-year span, with the Reds lifting the trophy on four of those visits to the capital. A victory in the 1989/90 edition remains their most recent major trophy.

45 mins to KO: The return of Casemiro will be a huge boost to United, given his spectacular impact since switching Real Madrid for the north of England last summer. A leader on the field, the 30-year-old central midfielder has enjoyed a 69% win rate with the Red Devils, while that figure falls to 25% without him.

1 hour to KO: Team news is here. Gustavo Scarpa and Danilo start for a new-look Forest, with the pair both moving from Brazil in the current transfer window.

Meanwhile, United have also gone with a first-choice lineup, other than the absence of Raphael Varane, who is on the bench. Casemiro returns to the midfield after missing the loss to Arsenal on Sunday through suspension.

1 hour 15 mins to KO: During Forest's Premier League exile, these two sides avoided each other in the cup draws, meaning their most recent meeting here came back in 1999. It was a humbling 8-1 loss for the hosts in Alex Ferguson's treble-winning campaign. It remained the biggest ever away win in the Premier League for two decades, until Leicester City's 9-0 demolition of Southampton.

1 hour 30 mins to KO: While they've struggled on the road against top opposition, Forest's home form versus the 'Big Six' has been impressive.

Most recently, the Reds fought out a 1-1 draw with Chelsea and really should've had more from the New Year's Day affair. They also defeated Liverpool 1-0 before the World Cup break, while getting revenge for a league loss to Tottenham by beating Antonio Conte's men in this competition.

1 hour 45 mins to KO: These teams are meeting for the second time in the last month, having resumed their Premier League campaigns post-World Cup at Old Trafford in late December. United eased to a 3-0 victory on that occasion, despite some fearless early signs from Forest.

Marcus Rashford opened the scoring and registered an assist for Anthony Martial that night, kickstarting a magnificent run of form for the England international which currently sees him as one of the most feared players in the country.

2 hours to KO: Welcome to The Sporting News' live coverage from the East Midlands. Forest have turned the City Ground into a fortress in recent months and are unbeaten at home across all competitions since September 16, knocking out Tottenham Hotspur and Wolverhampton Wanderers in the Carabao Cup.

Ahead of their biggest home cup game in over 30 years, the Forest faithful will play a crucial role in looking to push Cooper's charges one step closer to the final.

Dean Henderson is ineligible to play against his parent club, with veteran Wayne Hennessey starting in goal.

Ten Hag names an extremely strong lineup, with only centre-bacl Raphael Varane dropping to the bench.