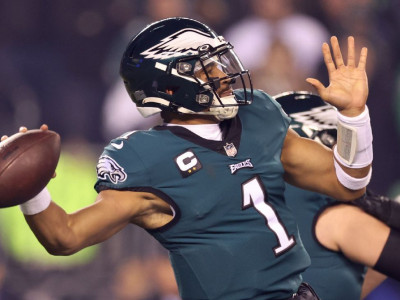 For the third time in the Super Bowl era, neither Conference Championship game has a team favored by at least three points. It has happened twice previously, in 1997 and 1982. Not only that, both conference favorites have flipped in the last week. Last week, San Francisco and Kansas City were favored to win their respective conferences. Despite both teams winning last week, both are now underdogs this week.

Kansas City had been favored in 14 straight playoff games entering this week (the longest streak in the Super Bowl era), including all 12 starts by Patrick Mahomes. Now they are home underdogs for just the second time in Mahomes' career. Kansas City also closed as a road favorite in Cincinnati earlier this season. It is the second time in the Super Bowl era that a team has been a road favorite in a regular-season meeting and then a home underdog in a playoff rematch.

While the biggest reason for the line move is Patrick Mahomes' injury status, the two teams have also gone in opposite directions against the spread recently. Cincinnati is 21-5 ATS in its last 26 games, including 13-3 ATS in its past 16 games. Joe Burrow is a staggering 18-1 ATS in his past 19 games as a favorite of under seven points. Meanwhile, Kansas City is 7-11 ATS this season, the worst ATS percentage by any team entering the Conference Championship game since 1997.

In the late game Sunday, Kyle Shanahan puts his 7-1 ATS mark in the playoffs on the line in Philadelphia. San Francisco has won 12 straight games, going 10-2 ATS in that span, including 6-1 ATS with Brock Purdy under center. However, this would be the first time Purdy is an underdog. On the other side, Jalen Hurts is a perfect 7-0 ATS in his career as a single-digit home favorite.

Brock Purdy is 6-1 ATS in his career as a starter, all as a favorite. It ties the fifth-longest favorite streak to begin a career by any quarterback since the 1970 merger (including playoffs).

San Francisco is 12-2 ATS against conference opponents this season.

Five straight Philadelphia playoff games have gone under the total.

Unders were 2-0 in conference championship games last season after going 8-2 in the previous five years.

Underdogs are 7-3 ATS in conference championship games in the past five seasons.

Patrick Mahomes is a home underdog on Sunday (as of now) for just the second time in his career (lost by 4 as 2.5-point home underdog vs Buffalo in Week 6). Entering this week, he had been favored in 47 of his 48 home starts, the second-highest percentage of any QB with at least 25 starts in the Super Bowl era (including playoffs). Only Roger Staubach (66 of 67 starts) has a higher percentage of home starts favored in (minimum 25 starts).

Cincinnati is 21-5 ATS in its past 26 games including playoffs. Cincinnati is 13-5 ATS this season (second-best) and 27-12 ATS since the start of last season.

Cincinnati is 19-1 ATS in its past 20 games when not laying at least seven points with seven straight covers (Joe Burrow: 18-1 ATS in span).

Joe Burrow is 3-0 outright against Patrick Mahomes, all as an underdog.

Kansas City is 2-11 ATS in conference games this season.

Kansas City is 0-4 ATS with more than six days of rest this season.