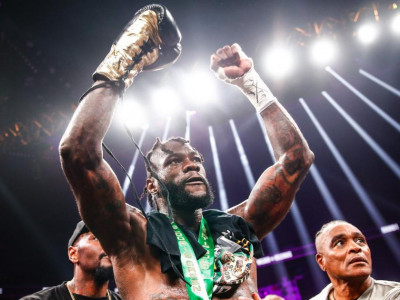 Not only is Deontay Wilder one of the hardest-hitting punchers in boxing today, but he also has one of the biggest personalities in the sport. He is not afraid to speak his mind, especially when it comes to the state of the heavyweight division and those who have crossed him before.

A former WBC heavyweight champion, Wilder is on the outside looking in. He recently returned to action following a year away from the ring, beating Robert Helenius via knockout. To get back to the top of the mountain, there are several big names in boxing to fight. A bout with Andy Ruiz Jr. has been discussed for quite some time.

What about Anthony Joshua?

"Joshua don't want to fight me. It's plain and clear,” Wilder told ESNews. “I don't know why people keep asking about that. In my career, I’ve been nothing but honest, straight-forward and truthful. I know certain things that has been said that people don’t like because I am who I am, I speak how I speak… either I like you, or I don’t.

“Everybody should've known when the $50 million was offered to him ... and he didn't take it. They should have known then it was something fishy. Even moving forward, Joshua don't want to fight. There’s certain information that I know, and there’s certain information that the public receives from others… In boxing, we know that loyalty is very rare.”

When Wilder beat Bermane Stiverne in 2015 for the WBC heavyweight title, it opened the door for big fights to be made. One fight on everyone’s mind was Wilder vs. Joshua. Joshua won the IBF heavyweight title in 2016, the WBA and IBO titles in 2017, and the WBO title in 2018. Wilder defended the WBC title seven times between then.

A fight for the claim of undisputed champion was always under consideration. Then, Joshua lost his belts against Andy Ruiz Jr. in 2019. He did regain them a few months later but has since lost two in a row against new champion Oleksandr Usyk. Wilder drew with Tyson Fury in 2018, win two more fights, and then lose back-to-back bouts and the title against Fury.

Wilder’s history of speaking against Fury is known. During their second fight, when Fury beat Wilder via TKO, Wilder used every excuse in the book to discuss his loss. He stated his walk-out equipment was too heavy, among other things. He even accused Fury of cheating, from using loaded gloves to drugs. The excuses resulted in some backlash.

Like boxing fans, the outspoken Wilder is interested in a potential undisputed heavyweight title fight between Fury and Usyk. He made his prediction for the bout while doubling down on cheating accusations. For both men.

Fury has consistently denied cheating against Wilder. There haven’t been any recent accusations against Usyk, and boxing fans have shared their confusion about Wilder’s statement.

Whether it is just him talking or attempting to get fans excited for the future, Wilder's words, true or false, continue to hypnotize fans.