Breaking down Liam Smith's win over Chris Eubank Jr. — do we need a rematch? 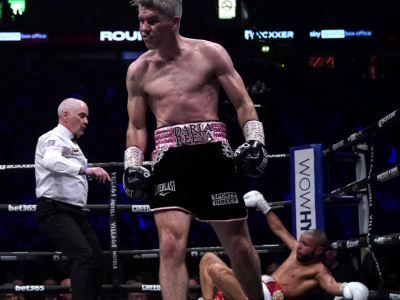 EXCLUSIVE — Liam Smith got the big-time boxing year in the UK off to a rip-roaring start last weekend with his dramatic win over Chris Eubank Jr.

Smith had been a slight underdog heading into the fight but, after three nip-and-tuck rounds, he made his class as a former world champion tell, flooring Eubank with a devastating combination of hooks and uppercuts from which he never recovered.

For the 34-year-old Liverpudlian, a big-money finish to a distinguished career lies in wait, while Eubank — just a year his junior — must ponder where he goes next as one of the most talked-about figures in British boxing over the past decade risks hanging his gloves up with a lingering sense of unfulfillment.

Eubank's promoter Kalle Sauerland told Sky Sports that his fighter will "let the dust settle" before deciding whether to invoke a rematch clause, although the noises coming from his camp do trend towards that being the course of action.

But do we need a rematch after such a conclusive outcome? And why was Eubank beaten more emphatically than he ever has been previously in his career? The Sporting News spoke to esteemed trainer David Coldwell to break down what happened and what comes next.

As fight night approached, an increasing number of observers declared the bout too close to call and backed Smith, who had mixed with and beaten superior opposition over the course of his career.

This spoke of good matchmaking, but Coldwell also feels Smith's overall skills in the ring are underrated and were a key factor in him being able to step up from super-welterweight so effectively against a career middleweight.

"Liam was being Liam. He's very, very patient," he said, having watched events unfold from ringside. "He's a slow starter but he's just manoeuvring you around. He makes you work when you don't want to work and, especially with Chris' style that he was boxing in, the gaps were more apparent.

"He's got a great boxing IQ and people under-rate him, they think he just walks forward with his hands up. But he's watching your movements, setting you up for things and setting little traps.

"He's a cute, cute fighter. You can't leave massive gaps like what Chris was doing, and he got found out."

The obvious question, considering the huge implications that defeat might have for what remains of Eubank's career, is why were those gaps there? Even among those backing a Smith victory, you'd have gone a long way to find anybody tipping an explosive fourth-round KO.

Broadly speaking, there have been two key talking points after Smith closed the show in style.

Eubank headed into the Smith fight after his bout against Conor Benn, slated for last October, collapsed amid huge controversy.

During fight week, it emerged Benn had tested positive for the banned substance clomifene. The 26-year-old has continued to protest his innocence and Eubank emerged from the situation with immense credit, even posting on social media to show he had made the stipulated catchweight.

It was hard not to think of that stunt as a boxer with a previously granite chin wilted beneath Smith's educated fists.

"The bravado of, when you don't need to, pulling yourself down to 159lbs or whatever it was… for what? Just to post an Instagram picture when the fight's not happening?" Coldwell said.

"Maybe that has come back to bite him — I don't know. I'm not around him, but when he's doing his socials and he's having KFC or he's having this and that, is it fake and just for Instagram or is he actually thinking that really he only needs to be 50 per cent so he can have a little bit of a cheat?

"When it comes down to actually making weight, does that bite you on your arse? He put a picture out the morning of the weigh-in in his bathroom and you could see all the veins popping out of his legs. Has he come out of a hot bath or something like that? He just looks like, wow, really shredded."

Eubank's best career wins, over the likes of Arthur Abraham, Avni Yildirim and James DeGale all came at super-middleweight and coming back down to 160lbs after passing 30 feels counter-intuitive.

"He's very, very tight at 160. As we get older, even down to the last pound or half a pound, it becomes harder to shift," Coldwell explained.

Nevertheless, Coldwell was at pains to point out that Eubank was simply beaten by the far better man on the night. And there was a more significant influence upon that outcome than the scales.

Eubank brought all-time boxing great Roy Jones Jr. back into his corner for the Smith fight, having linked up with the American for the three bouts prior to the Benn postponement.

As he did under the guidance of Nate Vasquez, Eubank linked up with Jones to refine what often looked like a fairly rudimentary style during his early career: fast hands and a high work rate were offset by technical flaws such as sub-par footwork.

Coldwell acknowledges the need for fighters to add different aspects to their game as they age but, with Eubank last weekend, he saw something close to pastiche.

"The way that he boxed was like a Roy Jones impression. Roy Jones is a one-off and Roy Jones had incredible fast-twitch and speed. He could get away with that and then, when he got older and the reflexes and speed started deteriorating, that's when there were holes in that style," he said.

"Before, Junior's attributes were his strength, his uppercuts, his volume. He wasn't the biggest of punchers and he had really poor feet. So, work on the feet and add that to the rest of his game; don't take what he's good at away.

"Now, he's got nice feet: movement-wise, you can see it. He looks great moving around; he uses his jab more than he used to in his previous style. But in the style that he's using, he leaves more gaps and is a lot more vulnerable.

"That style against Liam Smith done by Junior, whether he struggled with the weight or not, Liam would have got to him or beat him. Maybe the weight made it a lot more dramatic and quicker."

The most sensible course of action for Eubank would be a step up to super-middleweight alongside a coach more in tune with his attributes, despite the clear personal affinity he and Jones have developed alongside one another. A reunion with Vasquez feels unlikely but could be the answer.

However, a money-spinning rematch might persuade him to boil down to 160lbs now, albeit against a fighter who thrived at the higher weight and hurt him badly.

"My initial thought on the night was 'no' because it was so blatantly one-sided," Coldwell said on the prospect of Smith vs Eubank II. "Liam does what he does early doors and finished it. It was maybe 2-1 in rounds. I don't feel as though the rematch is needed.

"But, if Chris has got a rematch clause, then I'm intrigued. If he did cheat with his diet and struggle to make weight, does he struggle again at 160 or clean a couple of things up and take things a little bit more seriously? Does it make for a better fight?

"If it's a better fight, will we want to see it? Yes. But I don't know about that rematch."

The beauty of it for Smith is that, after a career where he has been the B-side to the likes of Saul 'Canelo' Alvarez, Jaime Munguia, Magomed Kurbanov and Jessie Vargas, his next fight will be a major event irrespective of who is in the opposite corner. Anfield has even been mentioned as the ideal venue to host a lifelong Liverpool fan.

"Even though I'm a Man United fan, I would love to see Liam get his fight at Anfield. Whoever that's against, I don't care," Coldwell added. "I've heard people talk about Kell Brook. I don't want to see Kell come out of retirement, but if he does, it's a great fight.

"Triple G? Why not? Golovkin's been an amazing fighter but he's not the man that he once was. Liam deserves a big fight. As long as he gets set up with a massive payday.

"Get him a world title shot if you can, but I'm not sure beating Chris Eubank Jr. gets you a title shot straight away."