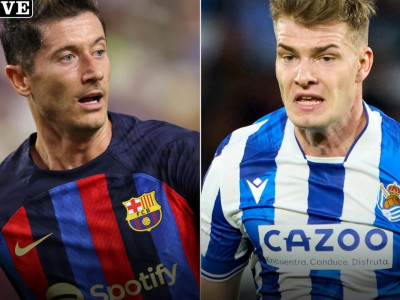 After winning the Supercopa de Espana, Barcelona can also advance to the semifinals of the Copa del Rey with a victory on Wednesday against Real Sociedad, one of the eye-catching battles of the 2022/23 quarterfinal stage.

It's a matchup that pits the first and third-place teams in La Liga, and statistically the two hottest teams in Spain. Barcelona haven't lost in 11 matches in all competitions, while Real Sociedad are on their best win streak in club history, triumphing in their last nine in all competitions.

It was the luck of the random draw that gave Barcelona the home field advantage for this single-elimination quarterfinal. Extra time and, if necessary, penalties will be used to determine a winner on the day if both teams are level after 90 minutes.

Real Sociedad have the unenviable task of facing both Spanish giants on the road in a span of four days with Real Madrid up next on Sunday in league play. Barcelona will hope to take advantage of that head-to-head battle to extend their lead atop La Liga as the turnaround under manager Xavi Hernandez continues.

130 mins from kickoff: With every Sociedad victory, the international profile of the manager simply known as Imanol continues to grow. Imanol Alguacil is a 51-year-old ex-Sociedad player who's been in charge since December 2018 and helped the team end a long trophy drought with the 2020 Copa del Rey title. It was their first Copa del Rey since 1988.

140 mins from kickoff: Here's another not-so-great omen for Real Sociedad's trip to the Camp Nou:

150 mins from kickoff: All eyes will be on referee Jesus Gil Manzano, who has shown more red cards to Barcelona than to any other team in his career, according to Relevo. And he will meet Robert Lewandowski face to face again after his red card cost Lewa a three-match La Liga suspension.

It's worth highlighting that VAR was made available in the competition beginning in the Round of 16 and will be available through to the final.

180 mins from kickoff: Real Sociedad are going to need something special to make it 10 straight wins in all competitions and earn a victory at the Camp Nou.

There's consensus among the Spanish sports dailies that manager Xavi Hernandez will be going back to the 4-4-2 he used to beat Real Madrid in the final of the Supercopa with Robert Lewandowski and Ousmane Dembele as the forwards.

Although Lewandowski and fellow forward Ferran Torres have one more match to serve in their La Liga suspension, it does not apply to the Copa del Rey and both are available for selection.

In addition, Frenkie De Jong and Ronald Araujo return after sitting out last weekend's La Liga victory over Getafe. There's also a belief that Marc-Andre ter Stegen could take over at goalkeeper instead of backup Inaki Pena, who has served as the Copa del Rey netminder thus far.

Playmaker David Silva picked up an injury during training the day before the match and will sit out. Together with the absence of Mikel Merino, manager Imanol Barrenetxea loses two of his most important attacking elements. Defensively, La Real will have holding midfielder Martin Zubimendi return to the lineup after sitting out their last La Liga victory due to suspension.

According to Barcelona's official web site, only one of the following regions will be able to watch a live stream of the Barcelona vs. Real Sociedad match: American fans on ESPN+.

In countries in which Bet365 operates, the stream is available for registered users of the sports betting site.