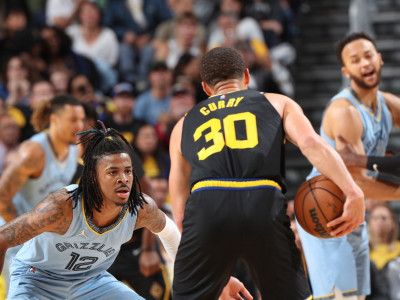 The NBA is kicking off its annual Rivalry Week, and you can’t have it without the Memphis Grizzlies and Golden State Warriors. The Grizzlies and Warriors have met for two postseasons in a row. In 2021, Memphis defeated the Warriors in the play-in tournament, and then last year, Golden State got payback in a six-game Western Conference Semifinal matchup.

Through the playoff history, there have been a bunch of different shots thrown from both sides that built this rivalry. A far callback is Andre Iguodala’s decision to not play for Memphis after being traded there from the Warriors in a salary-dump — and now Iggys gets booed every time he gets the ball in Memphis.

After a March 2022 blowout victory, Jaren Jackson Jr. tweeted “strength in numbers,” which led to Klay Thompson throwing strays and calling him a “bum” in the press conference after they won a NBA title. Not to mention, the subtle shots he threw at the Grizzlies during the championship parade. Dillon Brooks also called the Grizzlies a “dynasty,” which the Warriors veteran didn’t take too lightly.

Basketball code reached its apex in conversation during last year’s playoff series. Brooks also clubbed Gary Payton II with a flagrant 2 call, which led to the Warriors role player fracturing his elbow. Then, the physicality – and the debates of the intentions – heightened when Jordan Poole pulled Morant’s knee for a loose ball to deem him out for the playoff series.

Then, Ja Morant and Draymond jabbed back and forth in some friendly smack talk centered on real estate and Christmas Day game speculation. Once they finally got that desired matchup, the Warriors mopped the floor with the Grizzlies, and Thompson and Green taunted Brooks, Grizzlies throughout the game.

As the NBA is looking to acknowledge and rebuild the “rivalry” element, the Grizzlies and Warriors fit the bill to a tee. There are animosity and trash talk between the two teams, while the “dynasty vs. up-next” element rings true as well.

However, it doesn’t reach to magnitude or the stages these two teams have been on without superstar talents in Ja Morant and Stephen Curry — two point guards who are different, yet similar, and resemble the changing guard in this rivalry and the league.

Curry and Morant are two of the most captivating talents in the league. You could argue they are the most “must-see TV” players in the game. They’re capable of viral highlights in a moment’s notice, and you have to turn on the game instantly when they’re cooking their poor oppositions.

They do their magic in similar, yet different, ways. Both Curry and Morant keep the ball on a string, and defenders can be twisted or faked out with nasty combinations. Curry changed the entire game of basketball with his superb shot-making, and his flurries from downtown leave defenses with no way to contain them. They have to just pray he misses. Morant often does his damage in the paint with floaters or acrobatic finishes, but every so often, he’ll audaciously rise above his opposition for a dunk so vicious you’d think he has a vendetta against the defender or the rim.

Morant and Curry also play with this brash, audacious swagger. It’s fun, and you can tell they have fun – whether it’s a shimmy, celebrations, or a post-game griddy. Morant’s swagger has been evident since he arrived in Memphis. Along with the aforementioned skillset and celebrations, he isn’t afraid to let people know they can’t guard him, or that they’re too small to do so. Curry carries himself with this cocky swagger – again with the celebrating, running back on defense or turning towards the bench before his shot even falls in, or shaking his defender to near embarrassment.

Those are the exciting elements of their games that draw the audience in, crown them fan favorites for a younger generation, and make them appointment television even on a random Tuesday night game.

Expanding the scope a little further, Morant and Curry’s paths to the league are eerily similar. Both guards were under-recruited in high school, leading to them joining mid-major programs at Murray State and Davidson. With that platform, they shot up draft boards by captivating the nation and scouts in the same way they’ve impacted the NBA: blending their playmaking with elite shot-making (Curry), athleticism (Morant), and scoring prowess.

Steph Curry was the pioneer of the mid-major guard, especially in the modern NBA, setting the path for guys like Morant to make it into the league and thrive. Now, Morant is that guy for the next generation – perhaps the next Ja, Steph, or even someone like Damian Lillard or CJ McCollum.

Change of the guard is the theme for this Grizzlies and Warriors rivalry. Starting with their superstar point guards, they are arguably the 2 best players at their positions, and the younger Morant could be seen as the recipient of the torch passed from the older Curry – as one enters his prime and the other is near the end (at least that’s what Father Time leads us to think, but who knows what Steph has planned).

Like the San Antonio Spurs with them in the middle of the 2010’s, the Warriors may have found their predecessor as the team in the Western Conference with the Grizzlies – as there was talk of a possible Finals appearance from the Grizzlies in Draymond Green’s podcast. Obviously, windows can shut, but it’s a storyline that looms within this rivalry.

All in all, the concept of the changing guard mixed with the trash talk, friendly or not, and the animosity make the Memphis Grizzlies and Golden State Warriors the NBA’s premier rivalry in its inaugural Rivalry Week. However, the magnitude and platform for this rivalry doesn’t exist without the excellence of superstar point guards Ja Morant and Steph Curry – and they bend the game and bring oodles of excitement to it with their stylistic similarities and differences.