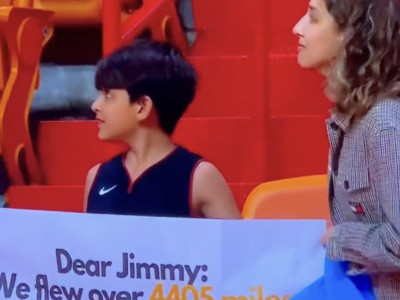 If you scroll through NBA Twitter, you’ll find many people complaining about stars taking rest days. The “load management” discourse is a long and winding road that is sometimes overblown, but occasionally feels heartbreaking when young fans travel long distances to see their favorite players — only for them to be in street clothes on the sidelines.

This was the case Tuesday night in Miami. The Heat were taking on the Boston Celtics, and Miami star forward Jimmy Butler was ruled a late scratch due to a back injury. As you can see, a little kid who traveled all the way from Argentina to see Butler was was heartbroken when told that Jimmy wasn’t playing, and wasn’t in the building.

The story doesn’t end there, however.

Butler and the power of TNT Tuesday magic helped get this kid down to courtside seats, where he got to meet Heat players like Gabe Vincent, and got a special Jimmy Butler jersey and basketball from the Heat. TNT’s Jamal Crawford also said that Butler had a surprise for the child as well, but we’re not sure what that is yet.

Perhaps even greater than that, he got to see a monumental Heat victory over Boston led by (*clears throat/*) NBA ALL STAR AND EVENTUAL ALL-NBA center Bam Adebayo. Adebayo had 30 points and 14 rebounds, and the game winning bucket in Miami’s 98-95 victory over the Celtics. Adebayo is now averaging 21.6 points and ten rebounds per game, and is most likely headed to Salt Lake City as an NBA All-Star.

The child, whose name is Felipe, is heading back to Argentina with a lifetime memory. One that originally started out sad turned into what is assumed to be a dream day, with the Heat picking up the win at the end.

One thing Felipe is headed 4,405 miles back to with… a lifetime memory pic.twitter.com/tIIamTyvLz— Miami HEAT (@MiamiHEAT)