Brock Purdy, Jalen Hurts, and a Saturday night in Oklahoma 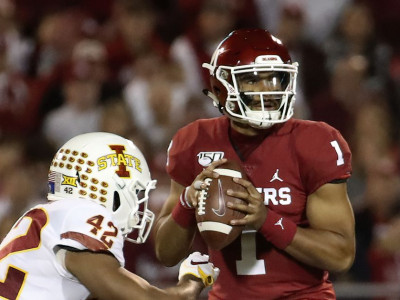 Before those two young quarterbacks ever dreamed of meeting in an NFC Championship Game.

They were a pair of Big 12 passers, meeting on a Saturday night in Norman, Oklahoma.

The date was November 9, 2019. The Oklahoma Sooners were the ninth-ranked team in the nation, led by Hurts, the transfer from Alabama. Yet Oklahoma was coming off a loss to Kansas State in their previous game, a defeat that dropped them out of the top five in the rankings.

On the other side of the field? An Iowa State team with Purdy at the helm. A sophomore at the time, Purdy entered his freshman season for the Cyclones as the third-string quarterback but took over as the starter early in the year. 2019 was his first full season under center for Iowa State. But the Cyclones entered the game with a 5-3 record that included losses to Iowa, Baylor, and Oklahoma State.

For a while, it looked like the Sooners would cruise to a victory.

Oklahoma got out to a 14-7 lead after the first quarter and enjoyed a 35-14 lead at the break. Along the way, you saw elements from Hurts and the Sooners’ offense that would be replicated years later in Philadelphia. Plays like this run design on the goal line, with Hurts as the vertical stretch on a midline read/outside zone concept:

The eight-yard touchdown plunge from Hurts gave the Sooners a 14-0 lead early in the first quarter.

Now from this season, here is Hurts running a similar design against the Arizona Cardinals:

As the first half wore on, and the Sooners built their lead, you saw some more quarterback run concepts, such as this power design from late in the first half. Oklahoma pulls both guards, and the running back also leads Hurts to the edge:

For good measure, here is Hurts scoring against the New York Giants this season, in Week 14:

The second half, however, is when Iowa State’s comeback began. Purdy threw three touchdowns in the fourth quarter alone, as the Cyclones slowly chipped away at the Oklahoma lead.

A critical play during their comeback effort? An interception thrown by Hurts with just under three minutes remaining. With the Sooners now clinging to a 42-35 lead, they faced a 3rd and 7 at their own 28-yard line. Oklahoma head coach Lincoln Riley put the ball in his quarterback’s hands.

Hurts opens to the left side of the field, but with his options covered, he rolls out of the pocket to buy some time. He forces a throw late in the down, which is intercepted:

Iowa State took over on the Oklahoma 35-yard line, trailing by seven with 2:30 left in the game. That was more than enough time for Purdy to throw his fifth touchdown pass of the game, this time to tight end Charlie Kolar from 13 yards out:

Let’s see. A well-placed throw to a tight end working against a defender with outside leverage. Where have we seen that before?

The touchdown cut the Oklahoma lead to 42-41, and with just 24 seconds left, Iowa State head coach Matt Campbell faced a decision. Does he send his kicker out onto the field to tie the game, setting up overtime on the road?

Or does he go for the win?

Campbell sent his quarterback back onto the field.

But Purdy’s final throw of the night would be intercepted:

After the game, Campbell talked about putting the football in his quarterback’s hands to potentially close out a win: “When I see Brock Purdy making unbelievable play after unbelievable play, I’d rather put the game in his hands because I trust him,” Campbell said. “Yeah, the question if I would do it over again. Yes, in a heartbeat.”

Purdy’s final line that night? The QB completed 19 of 30 passes for 282 yards and 5 touchdowns, with the only interceptions coming on the two-point conversion try. He added another 55 rushing yards and a touchdown on 18 attempts.

As for Hurts, the Oklahoma quarterback completed 18 of 26 passes for 273 yards and 3 touchdowns, along with his interception. Hurts rushed for another 68 yards and a pair of scores on 22 carries.

Fast-forward a few years, and these two quarterbacks meet again, with a trip to Super Bowl LVII on the line.

Will this Sunday see another one-point game between these passers?

Only time will tell.