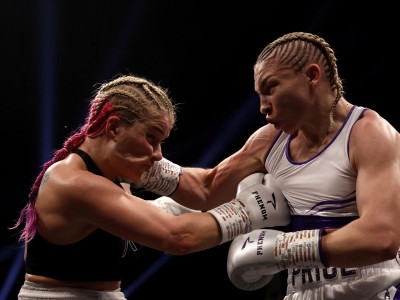 Lauren Price is looking for a homecoming fight in Wales as the Olympic gold medallist prepares to take her professional career to the next level in 2023.

At the Tokyo Games in 2021, the GB squad was Britain's most successful Olympic boxing team in 100 years. Wales' Price was one of the stars of that side, winning the middleweight gold medal with a sequence of tremendous performances.

She turned professional in 2022, winning her debut at Wembley Arena and then halting Timea Belik on the undercard of Claressa Shields vs Savannah Marshall at The O2 in London in October.

Now Price wants to return to Wales to fight as a professional.

"That would be brilliant. That's the dream getting the Welsh fans behind me," Price told Sky Sports. "That would be a dream come true to box in Wales.

"We are talking about that," she added. "The sooner I box in Wales and get the fans on board, the better. I had a lot of support at the Olympics.

"If I box in Wales they'll get behind me."

Boxing is not the only sport where she has represented Wales. She also played football for the international side.

"I played football, I used to play for Cardiff," she said. "To box in the stadium there would be great one day."

Price's Olympic gold medal was all the more impressive as she won it at middleweight, a division or two above her natural weight. Over the coming years, once she reaches world-class as a professional there is a potential super-fight that could be made. Boxing Claressa Shields at super-welterweight would be hard to resist.

"As long as she comes down a bit then yeah, why not?" Price said cheerfully. "Who knows, it might even fill the Principality [stadium]."

Price intends her next contest to be her last six-rounder before moving up to eight rounds. Before the end of 2023, she wants to be competing over 10 rounds, the championship distance.

Like her partner Karriss Artingstall, a Tokyo Olympic medallist and now professional fighter herself, Price wants to box five times within the next 12 months.

"We're in six-rounders but we're training like it's a 10-round fight. We're both in top condition," Price said. "If I get five fights in, at the end of the year I'll be more than ready to step up.

"The pro game is different so we'd like step-ups. I want to be in a 10 rounder but I'll listen to Rob [McCracken, their trainer] and follow his advice.

"As an amateur, we're not used to crowds and stuff like that. That's something we've got to get used to as well. All the little things as a pro which is different to the amateurs, not wearing headguards, getting smaller gloves, having a crowd there.

"When the time is right he [McCracken] can point us in the right direction to win the world titles. Along the way now the next couple of fights are learning fights to get us in the right place."

Price is already developing. Only two fights into her pro career, she looked dangerous last time out when she forced a stoppage against Belik inside four rounds.

"I gave a lot of weight away as an amateur because I was boxing at 75kgs, so now I'm boxing people the same weight as me. So it is a little bit different and it takes a lot of getting used to but I still want to obviously keep my speed and my movement because that's what I'm about," Price said.

"But in the professional game, I want to be able to land big shots as well, an all-rounder really. In the first fight, I boxed quite technically and in my last fight I just wanted to get her out of there."

Performing on that major all-women's show at the O2 was an obvious high point of 2022. But there was also a different kind of highlight for her last year when King Charles presented Price with her MBE.

"Myself, Karriss, my nan and my auntie all went up to the castle," she said. "It was great to experience that and have my family with me.

"He just talked to me about my sport and I said to him about playing football for Wales and winning caps and obviously going to the Olympics. We had a little chat for five minutes."

For 2023 now it is back to the hard work of training and boxing. "Looking realistically, I'd like to have one more six-rounder and then go on to eights and possibly have a 10 rounder at the end of the year," Price said. "Just to get out as much as I can, five times… I don't really want to have any time off. "This year we're going to have a busy year."