With Durant out, Kyrie's confidence is driving the Nets 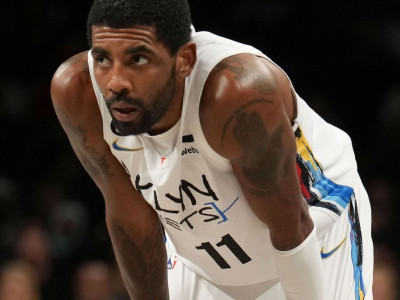 Kyrie Irving does not lack confidence.

It's his defining characteristic. It's also the reason that, after losing four straight, the Brooklyn Nets have stopped sliding in the Eastern Conference standings in Kevin Durant's absence.

It was Irving who repeatedly set the tone for the rest of the group publicly in the aftermath of the sprained right MCL Durant suffered on Jan. 8. Irving pushed hard against the idea the Nets would repeat last year's tailspin without Durant when they lost 11 games in a row in January and February while Durant was out with a sprained left MCL.

What would be so different this time around?

After leading the Nets to a 120-116 win against the Golden State Warriors on Sunday, a game in which Brooklyn trailed by as many as 17, Irving's confidence shined bright.

"I told you guys that I was putting a lot of pressure to be the first option or the second option or be the main one," Irving said. "And this is just a message for everybody at home, first option, second option, third option, it don't f---ing matter to me. It don't matter who has the ball in their hands as long as they're being aggressive and it's the best shot for our team."

Irving, who enters Wednesday's game against the Philadelphia 76ers (7:30 p.m. ET on ESPN) having racked up 116 points, 25 rebounds, 22 assists and 8 steals over his past three games, has taken over the No. 1 slot that Durant filled, even as he downplays the moniker.

But Irving's teammates know the only way for the Nets to survive Durant's absence is for Irving to continue dominating down the stretch in games.

"He's special," Nets swingman Royce O'Neale said after watching Irving drop 48 points in a 117-106 win against the Utah Jazz on Friday. "He's doing it night in, night out. He's leading us. We got his back, we're supporting him. He's finding us when he gets double-teamed or he gets into the lane and don't have his shots."

In learning to get comfortable again at the top of the Nets' food chain, the trust Irving is building with the rest of the group is on full display. Irving's ability to make the right pass, and his confidence -- both in himself and in the rest of the group -- underscores the biggest misconception about the seven-time All-Star from fans and those outside the Nets' locker room. After all the controversy and chaos he has put the organization through over the past couple of seasons, Irving's teammates still love him. But more importantly, they trust him.

Irving played 29 games last season because of his decision not to get the COVID-19 vaccination, which prevented him from playing home games for most of the season due to New York City's vaccine mandate. He was voluntarily absent from the team for 11 days in 2020-21, missing seven games in that stretch. Then this season he was suspended for eight games for his social media posts promoting a book and movie featuring antisemitic themes. Despite it all, the Nets players are confident Irving will be there for them when they need him to be.

That sentiment highlights a fascinating reunion with James Harden heading into the Sixers game. Harden came to the Nets from the Houston Rockets two seasons ago believing he could win a title with Irving and Durant. He left for Philadelphia a little over a year later, in part because he couldn't trust Irving would be on the floor.

Get access to exclusive original series, premium articles from our NBA insiders, the full 30 for 30 library and more. Sign up now to unlock everything ESPN+ has to offer.

Harden acknowledged after the trade that part of the reason he pushed to get out was because of the uncertainty surrounding Irving's status. He gave up on the group right around this time a year ago. Durant was hurt, Irving was in and out of the lineup and Harden seemingly played like he didn't want to be there anymore.

Over the past couple of weeks, both Irving and Nets center Nic Claxton have taken not-so-veiled swipes at Harden, without naming him specifically, saying that they felt this team was more equipped to handle Durant's absence than last year's group that collapsed leading up to the February trade deadline.

"Last year ... it was kind of a toxic environment," Claxton said after a Jan. 17 loss to the San Antonio Spurs. "We didn't know if everybody wanted to be here at the time. This year, there's no divide between everybody that's out there."

Harden's appearance against his old team figures to stir lingering feelings about what might have been if the talented trio had stayed together, but, for his part, Irving looks and sounds like a man who has moved on.

Irving offered another subtle difference in how he's feeling on this trip. After weeks of wearing sunglasses to the podium for his news conferences with reporters following his suspension, Irving took the glasses off after Friday's win against the Jazz and again following Sunday's triumph over the Warriors. When asked Sunday where he stood after the rocky start to the season, he offered a glimpse into his thinking.

"I think a lot of things that have happened are in the rearview," Irving said. "I haven't forgotten about them, but it's something that I don't prioritize as much because the team is most important here and just making sure the best way I know how mentally, physically and emotionally. So I feel like we're past that as an organization, as a team, me individually, stronger mentally."