2023 draft order: Bears and Texans at the top 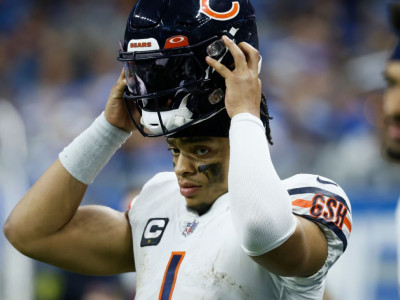 The order for the top 27 picks in the first round of the 2023 NFL draft is set after the divisional round of the playoffs, with the Chicago Bears picking No. 1 and the Houston Texans picking No. 2. The Texans' dramatic Week 18 victory allowed the Bears to sneak into the top spot. Will Chicago keep this pick or trade back? Will the Texans choose their signal-caller of the future with their selection? The Bears and the Texans are followed by the Arizona Cardinals at No. 3.

Check out the top 27 picks below, with Nos. 28-31 projected from the ESPN Football Power Index (FPI), which projects the order by simulating the rest of the season 10,000 times. (Team write-ups below have been updated from December)

There will be plenty of quarterback-needy teams looking to trade up to the Bears' No. 1 spot. A year after not having a first-round selection, Chicago could come away with multiple firsts by trading back, allowing general manager Ryan Poles to address needs at defensive line, wide receiver and offensive line. The Bears ranked last in the NFL in sacks (20) and pressures (96). Bolstering their pass rush is priority No. 1, and if it doesn't come by signing free agents, they could find that help atop the draft. -- Courtney Cronin

The Texans' rebuild is stuck in the mud. Why? Because they're searching for their quarterback of the future and --with Lovie Smith fired hours after the season finale -- a new coach. There was optimism before the season that Davis Mills could become the long-term answer, but he was benched after 10 starts (and 11 interceptions). After backup Kyle Allen struggled through two starts, however, Mills returned as the starter in Week 14. Going into this draft, Houston must find its franchise signal-caller to give its rebuild any legitimacy. -- DJ Bien-Aime

Arizona will have a plethora of needs in the first round, and sticking to its "best player available" philosophy hasn't always benefited the team. This draft will be about making quarterback Kyler Murray happy and giving him more options to work with, whether that's an offensive lineman or an offensive target. The Cardinals will have a new coach and general manager -- they hired Monti Ossenfort for the GM job on Jan. 16 -- calling the shots for this draft. Murray's rehab and surgery for the season-ending knee injury he suffered in Week 14 lingers over their offseason. -- Josh Weinfuss

The Colts have drafted two quarterbacks in the first round since 1998: Peyton Manning and Andrew Luck. With their need at the position as dire as ever, look for a heightened focus on the passers in this class. The Colts have other issues to sort out -- such as who will be their coach going forward -- but there is no debate about the critical situation at quarterback, given Matt Ryan's age (37) and performance and the unproven status of Sam Ehlinger. -- Stephen Holder

The Russell Wilson trade has general manager John Schneider and the Seahawks sitting pretty. With the Broncos at 5-12, the first-round pick they owe Seattle landed at No. 5. Picking that early gives the Seahawks a rare chance at adding the impact defensive lineman they badly need up front, but they'd also need a quarterback if they let Geno Smith walk in free agency. Seattle also owns Denver's second-round pick, meaning it's likely to have three top-40 picks. -- Brady Henderson

Ever since he arrived in Detroit, general manager Brad Holmes has shown an eye for draft talent, picking gems such as fourth-round receiver Amon-Ra St. Brown, who is off to a record-breaking start to his career. There will be tough decisions made in this draft, and the Lions likely will have to address quarterback and cornerback. Yes, Jared Goff had a great season, but Detroit needs to secure young talent at that spot, and the secondary is its largest need on defense. -- Eric Woodyard

A year after waiting until the third round to make its first selection -- general manager Dave Ziegler and coach Josh McDaniels dealt first- and second-round picks to Green Bay for wideout Davante Adams -- Las Vegas again needs to get a little bit of everything. Little has changed, even with stars such as Adams, running back Josh Jacobs and defensive end Maxx Crosby on the roster. The wild card, though, is quarterback. Because even though Derek Carr signed a three-year, $121.5 million extension with a no-trade clause last offseason, the Raiders have a three-day window after the season to move on with a relatively cheap $5.6 million salary-cap hit. -- Paul Gutierrez

The Falcons might be well-served by focusing on defensive linemen and edge rushers in this draft. They once again ranked toward the bottom of the league in sacks (21) and pressure percentage (22%), and the team desperately needs to find players to surround star tackle Grady Jarrett. It was Atlanta's biggest need last year -- and remains its biggest need this offseason, only this time there is cap money to play with. -- Michael Rothstein

The Panthers haven't taken a quarterback in the first round since Cam Newton with the top pick in 2011. With the No. 9 pick, it is time to end the quarterback turmoil the team has been in since midway through the 2018 season when Newton suffered a shoulder injury. With the trade of running back Christian McCaffrey to the 49ers, general manager Scott Fitterer has positioned himself to have the picks to move up for a quarterback if necessary. -- David Newton

The 14-3 Eagles have made a deep run in the playoffs and will still end up with two first-round picks. With Jalen Hurts solidifying his spot as the starting quarterback, Philadelphia can focus on the offensive line, defensive line and secondary. -- Tim McManus

The Titans will be making draft selections without general manager Jon Robinson for the first time since 2015 -- they hired Ran Carthon for the GM job on Jan. 17. This draft will be critical for a team stuck in a cycle of early playoff exits. Tennessee has invested heavily in the defense and gotten the desired results, but the offense lacks established dynamic playmakers outside of running back Derrick Henry, so this draft needs to yield players who can help put points on the board. -- Turron Davenport

This pick is the Texans' second of the draft and came from a trade with the Cleveland Browns to acquire quarterback Deshaun Watson. In the trade, the Texans received 2022, 2023 and 2024 first-round picks, plus a 2023 third-round pick and a 2024 fourth-round pick. -- ESPN staff

The Jets should be back to having a normal draft. After stockpiling picks in the past two drafts -- they had six total selections in the top 36 -- they have one pick in each of the top rounds. That makes it harder to fill needs, but they obviously don't have as many as in previous years. This puts more pressure on general manager Joe Douglas and his scouting department because the margin for error is slimmer than in the high-volume years, but it's a sign of progress in their rebuild. -- Rich Cimini

The Patriots are stocked with picks -- an additional third-rounder from a 2022 draft-day trade with Carolina, an extra fourth-rounder from previously dealing running back Sony Michel to the Rams, and two additional sixth-rounders from trades involving Stephon Gilmore and Jarrett Stidham -- which will provide plenty of flexibility to make trades. If an offensive tackle is in striking distance early, that would be a slam dunk. Shaky play at that position, due in part to a run of injuries, has contributed to the offense ranking 20th in the NFL in sacks taken per pass play. -- Mike Reiss

Still waiting for that first-round receiver? It will be Year 21 without one, especially since it appears the Packers hit on second-rounder Christian Watson and fourth-rounder Romeo Doubs last year. Yet the Packers still need to get their quarterback -- whether it's Aaron Rodgers or Jordan Love -- help. That must come in the form of a tackle and a tight end. Who knows how much longer David Bakhtiari will hold up at left tackle? And it's still not a given that Yosh Nijman is a long-term starter. At tight end, Robert Tonyan is their only playmaker, and he's on an expiring contract. -- Rob Demovsky

The Commanders have eight selections in the draft, with three of those coming in the seventh round. They do not have a third-round pick because of the Carson Wentz trade but likely will get one for losing guard Brandon Scherff to free agency last offseason. They're in a good position to address a few areas. Washington needs more depth at corner and could use its first pick there. Quarterback could be an option, depending on how the position shakes out: Wentz has no guaranteed money and can be cut; Taylor Heinicke will be a free agent; and Sam Howell started one game. The Commanders need more quality interior offensive linemen and speed everywhere. -- John Keim