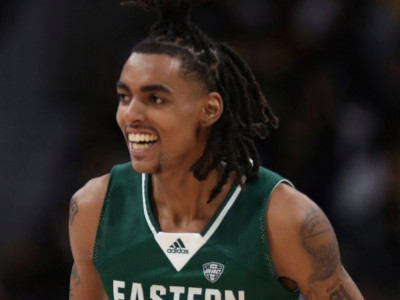 Emoni Bates is still only 18 years old, but his life in basketball already has enough chapters to fill a novel. At 15, Bates was being hyped as a future NBA superstar, drawing comparisons to “a young Kevin Durant” by ESPN and said to “often resemble a 6’ 9” Stephen Curry,” in a Sports Illustrated cover story.

From that point forward, interest waned: Bates’ winding high school career cooled much of the hyperbole, with scouts noticing his negative wingspan, shaky defense, and shoot-first-second-and-third mentality that made him difficult to fit into traditional team structures. Bates graduated early and committed to Memphis, beginning his freshman year as a 17-year-old who was the youngest player in college basketball. After 18 uneven games, he was out of the lineup for nearly the rest of the season with a mysterious back injury.

Bates entered the transfer portal, and bypassed bigger offers to return home to his home state to play for one of the worst teams in college hoops, the Eastern Michigan Eagles. As soon as he arrived on campus, he was arrested on gun charges.

Just when it seemed like Bates had hit rock bottom, he reminded everyone of his immense talent the moment he took the floor for Eastern Michigan. Bates hung 30 points on Michigan in his debut for the Eagles, dropped 36 points on South Carolina a month later, and kept putting up big scoring performances in between. On Tuesday night, Bates had his best game yet: 43 points on 9-of-14 shooting from three-point range, including 29 straight points during the first half. Watch the remarkable highlights here:

Bates’ shooting efficiency on the night was wild: he went 15-of-23 from the field, and only earned four trips the foul line (making all four) the entire game. Despite every player on Toledo knowing Bates was looking to score the ball, he continued to pace the offense nearly every possession with tough shot after tough shot.

Toledo beat Eastern Michigan, 84-79, anyway. The Eagles are 4-16 on the year and currently rank as the No. 333 team out of 363 in DI this season, according to KenPom. They weren’t any better last season without Bates, finishing 10-21 and ranking No. 316 in KenPom.

The Eagles may be terrible, but Bates has legitimately been a star scorer all year. Days away from his 19th birthday, he’s rejuvenated his basketball career and can say he’s regained at least some NBA interest. We had Bates as the No. 26 overall pick in our latest 2023 NBA mock draft.

Bates knew he wasn’t going to single-handedly lift Eastern Michigan to prominence — the program’s problems are much too deep for that — but he has injected real excitement around the program. Those star flashed he showed at such a young age are still all over the tape: he has so much versatility as a shooter, hitting step-backs off the dribble, running around screens, and draining shots from beyond NBA range. He’s proven he can be a consistent scorer all year even if he’s not the most efficient shooter (he entered the game shooting just under 35 percent from three). He’s still one of the youngest sophomores in the country, and he just keeps getting better.

Bates will finally be old enough to enter the NBA Draft this summer, and if he declares, he’ll get every opportunity to prove he can earn a spot in the league whether he’s drafted or not. Regardless of his future, the way Bates has turned it around qualifies as one of the feel-good stories of the college basketball season.

A story with this many twists and turns can still very much have a happy ending.