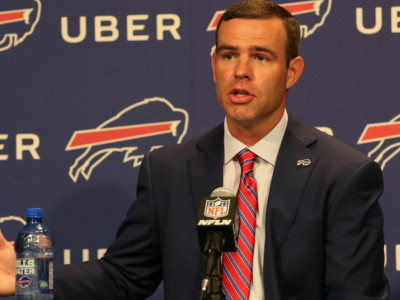 The Bills have found themselves in a precarious position following Sunday's loss to the Bengals. Their offensive line was clearly outplayed, their wide receivers struggled to find separation, and the Bengals offense had the defense's number all game.

The Bills' season ended two days ago, which means the team is very much still going through the healing process. General manager Brandon Beane, who met with the media Tuesday, can attest to that.

When it was asserted to him that perhaps the Bills should "adapt to" the Bengals' way of building a roster, Beane quickly pushed back.

"They have a good team," Beane told reporters. "They right now are on the advantage of a rookie quarterback contract. They had some lean years, without going too much into their build. I don't want to suck bad enough to have to get Ja'Marr Chase. He's a heck of a talent. I would love to have him. But you gotta go through some lean years to do that."

For context, this is the full Brandon Beane quote that included "I don't want to suck bad enough to have to get Ja'Maar Chase." in response to a question from @AdamBenigni."You gotta go through some lean years to do that."@WGRZ #BillsMafia pic.twitter.com/W9fBaYQbvR— J.T. Messinger (@JTMessinger)

Beane's answer, while abrasive on the surface, is also factual. The Bills signed Allen to a six-year extension worth $258 million in 2021 and Diggs to a four-year deal worth $96 million last offseason. If the Bills are going to get a player of Chase's caliber, especially in the current draft climate, they'd have to pick in the top-10. Chase, for his part, was picked fifth overall.

For further context, Allen and Diggs will take up about 25 percent of the Bills' salary cap next year. Burrow and Chase (both on rookie deals) will be around 9 percent.

For the Bills' part, despite their disappointing finish this season, they're still going to be a contender in the AFC next season. They're going to have to be "creative" with the cap, as Beane told The Buffalo News, but it's clear the intention is to reload in the offseason. Not rebuild, as the Bengals did to get to where they are, which happens to be in back-to-back AFC Championship games.