Mitchell pained by groin, own play in loss at MSG 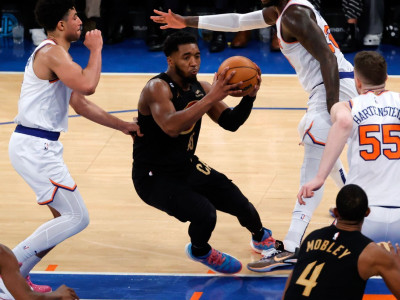 NEW YORK -- Cavaliers star Donovan Mitchell was unsure about his status moving forward after his groin tightened up on the final play of Cleveland's 105-103 loss to the New York Knicks at Madison Square Garden on Tuesday night.

"It felt the same as before," said Mitchell, who had missed the prior three games with groin tightness. "I don't know what comes next."

Mitchell had attempted to drive into the paint and tie the game for the Cavaliers, but his shot was blocked by Knicks center Isaiah Hartenstein for the second time in the game's final minute. Then, after grabbing the rebound and kicking it out to forward Evan Mobley -- who missed another potential game-tying shot as New York claimed the victory -- Mitchell stayed down on the court for an extended period. He later said he not only was dealing with groin tightness, but also cramping in both legs, all of which happened on that final drive.

He eventually got to his feet and walked off the court under his own power, though he was visibly upset while doing so. Later, Mitchell admitted the frustration came from both a combination of his poor play down the stretch -- not only did Hartenstein block two of his shots, but RJ Barrett stripped him on a drive inside the final 90 seconds -- and being unsure about his health going forward.

"I felt good enough to come back, and for that to be the last five seconds of the game really pisses me off," Mitchell said after finishing with 24 points on 9-for-24 shooting to go along with eight rebounds, eight assists and four steals in 38 minutes. "But I fumbled the game away for the group, and that's on me. Poor execution on my part down the stretch. They drew up perfect plays, and I just didn't execute them.

"It's definitely both [frustration about the injury and his play], but more so [the injury]. I'm praying that I'm all right."

Mitchell's status overshadowed what was a frenetic 48 minutes for both teams, as the Knicks -- who had lost four straight -- got back on track with a desperately needed win after play went back-and-forth repeatedly in the fourth quarter thanks to 36 points and 13 rebounds from Julius Randle. But, from his vantage point, Mitchell said the loss was solely on his shoulders.

"I screwed that up," Mitchell said. "The last few possessions, I can cry about the foul calls all I want. I've just got to be more poised for our group. I had one turnover on a layup, even though I feel like I got fouled, pull it out, run a play, get something. And then the second one where I airballed the layup, that's on me. I let the team down at the end of the game. We played a really good game up until that point, all of us, and I didn't do my job. And that's on me."

His teammates, however, felt otherwise.

The emotions of the night were only heightened by the fact that it was Mitchell's second game at MSG since the Cavaliers landed him in stunning blockbuster deal in September after the Knicks and Utah Jazz had talked about a possible trade for the All-Star guard for months. New York has now won both games.

Mitchell, though, has been spectacular in his first season in Cleveland, averaging 28.3 points per game -- good for 10th in the league -- while shooting 48.1% from the field, 39.6% from 3-point range and 86.9% from the free throw line -- all career-highs. He's likely to be voted into the All-Star Game as a starter for the first time when selections are announced Thursday night.