Rob Page's journey to the Wales top job in Qatar 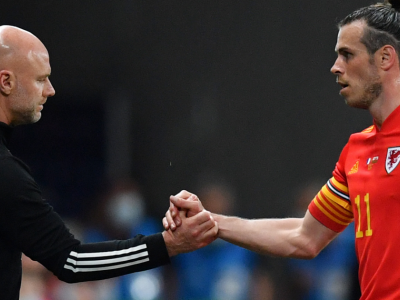 In Qatar, Wales are making their first appearance on the World cup stage since 1958 following a battling showing in their delayed playoff matches.

Spearheaded by captain Gareth Bale, Wales find themselves at a third major tournament in just over six years, following their memorable displays at Euro 2016 and Euro 2020.

However, despite failing to secure an automatic spot in Qatar, Wales will once again be looking to upset the odds, as Rob Page leads his squad in the Middle East.

Page's own rise to the top job in Welsh football has mirrored that of his team, and the former defender will be aiming to crown that ascent with a successful tournament.

Page's profile outside of Wales paints him as a relatively unknown figure, with the 48-year-old emerging through the ranks at the Football Association of Wales to take charge of the senior men's team.

He was thrust into the spotlight as assistant to former manager Ryan Giggs in 2019, before eventually taking on the top job temporarily a year later when Manchester United icon Giggs was suspended and placed on leave due to off-the-pitch issues.

Giggs' arrest on charges of assaulting his ex-girlfriend, and a subsequent legal battle that is still ongoing, saw Page first elevated to caretaker boss in November 2020 to lead the Dragons through Euro 2020, before he was appointed as a permanent replacement following Giggs' resignation and the win over Ukraine in the UEFA playoffs in June that booked Wales a spot in Qatar.

The bulk of Page's time in charge has been framed by uncertainty over how long he would remain in the job, due to Giggs' contract with the FAW.

His early stance was to steadfastly focus simply on the task at hand in leading the team, before being thrust into the frame to guide Wales into Euro 2020, and then through the final stages of qualification for the World Cup.

Here's a look at his record in charge heading into the World Cup.

Following his confirmation as head coach, the FAW immediately opened contract talks with Page to extend his deal beyond the World Cup.

His new four-year contract, signed in September, ties him to the role until after the 2026 World Cup.

Details on Page's new agreement were not made public, but he is thought to be receiving slightly less than Giggs' reported £400,000 annual salary.

Page's initial brief followed closely to Giggs' strategy, however, as a former defender himself he instilled a greater focus on resilience ahead of Euro 2020.

Page opted for a back-three in seven out of the nine games between initially taking on the job and the start of Euro 2020, and his natural inclination to play with wing-backs who can get forward to support a front trio has continued. It yielded narrow wins in their two playoff games — against Austria and Ukraine — to give them the results required to get to Qatar.

Page has relied on the experience of Wayne Hennessey, Ben Davies, Chris Gunter and Joe Allen to steady his team, with Dan James offered as a counter-attacking threat, to cause havoc and create increased space for Bale.

Giggs was initially arrested on suspicion of assault in November 2020, in relation to an allegation made to police by his ex-partner.

Giggs and the FAW agreed on an immediate break, with the former Manchester United winger placed on leave.

He was subsequently charged with two counts of assault causing actual bodily harm and a charge of common assault, alongside another charge of coercive and controlling actions.

Giggs denied all the allegations during a trial in Manchester in August and September 2022, however, the jury were eventually dismissed by the judge, after failing to reach a verdict on any of the charges.

Giggs faces a retrial in 2023, but the 48-year-old had already resigned from his post with Wales in June.

Page forms part of a very short list of Wales managers to lead the country at a major tournament, following Chris Coleman (Euro 2016) and Jimmy Murphy (World Cup 1958). In Qatar, he will be out on his own as the only Wales boss to take charge at two showpiece competitions, having previously led the Dragons at Euro 2020.

Page began his off-field career with a string of coaching roles at then English League Two side Port Vale in 2011, before rising to take caretaker charge of the side in 2014.

After steering the club away from relegation at the end of 2014/15, he was appointed as permanent boss in May 2015, on a two-year deal.

Following a mixed first season in charge, he opted to leave Vale Park ahead of the 2016/17 and join newly promoted Northampton Town, but his tenure lasted less than six months, as their form plummeted.

After a short break, he took up a coaching role at Nottingham Forest in January 2017, before taking charge of Wales' Under-21 side two months later.

Page's playing career doesn't match up to Giggs' incredible success with United, as he spent the majority of his career outside the Premier League.

As a no-nonsense defender, Page made over 200 appearances for Watford, including his sole top-flight campaign, before joining Sheffield United in 2001.

After leaving Bramall Lane in 2004, he played for Cardiff City, Coventry City, Huddersfield Town and Chesterfield, alongside 41 senior caps for Wales.