Josh Allen says he's 'got to go be that guy' as he plays hurt for Bills vs. Lions 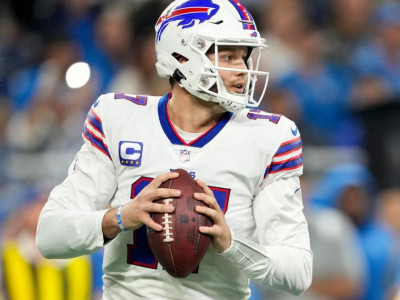 Josh Allen is in the midst of one of the worst statistical spans of his career, and it continued in the Bills' 28-25 victory over the Lions on Thanksgiving.

Allen completed 24 of 42 passes for 253 yards with a pair of touchdowns and another red-zone interception. He found success on the ground, rushing 10 times for 78 yards and another score.

The Buffalo quarterback reportedly suffered a UCL injury in his throwing elbow lage in his team's Week 9 loss to the Jets, an ailment that could hamper his throwing ability, though he has said that it has not impacted his play.

Has he been playing injured all this time? That doesn't seem to matter to Allen.

"We’re 8-3. That's it. I'm out there," Allen said. "If anybody says they're playing injury-free in this league, they’re probably lying to you. Everybody’s battling injuries, battling bumps and bruises. If I’m going to be the guy that I think I am, I say I am and my teammates think I am, (then) I've got to go be that guy, so that's all there is to it."

Since the team's Week 7 bye, Allen has completed just 59.6 percent of his passes for 1,203 yards with six touchdowns and seven picks. He has rushed 34 times for 304 yards and three scores, with three fumbles.

Still, when Allen needed to be clutch Thursday, he delivered. The Bills took possession with 23 seconds left to play in a 25-25 game, and Allen got to work right away. He hit Stefon Diggs for a 36-yard completion down the middle to the Lions' 39 to set the Bills up in field-goal range. He then rushed for 12 more yards on a pair of carries to set Tyler Bass up for a game-winning 45-yard field goal.

Allen appeared to get up gingerly after the last run, but he said it was nothing to worry about.

"Yeah, I just kind of landed on my glute there," he said. "Just kind of knocked the wind out of me a little bit there. I'm good. It's football."