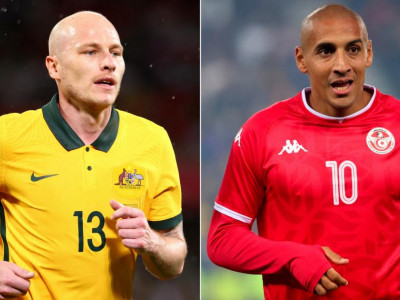 Australia and Tunisia will be looking to earn their first wins of the 2022 World Cup when they face each other in Group D on Saturday.

Tunisia performed impressively in their opening match against a strong Denmark team, threatening a surprise on their way to a goalless draw with the Euro 2020 semifinalists.

The Socceroos were on course for an upset early on against reigning champions France, taking the lead through a clinical Craig Goodwin finish before Les Bleus hit back to win 4-1.

A positive for Australia from their defeat to France was the fact that they picked up no new injuries, as well as defenders Harry Souttar and Kye Rowles completing the full 90 minutes.

With star attacking midfielder Ajdin Hrustic set to return to the starting 11 after sitting out the match, any other changes made by coach Graham Arnold would be tactical ones.

With Hrustic likely to be back, it means Riley McGree is expected to return to the bench unless there is a formation or tactical change. Cam Devlin's workrate and tenacity could also see him elevated as a surprise starter.

In defence, we could see Fran Karacic and Bailey Wright come in for Nathaniel Atkinson and Rowles, who both endured difficult games. Still, they were up against top-class opposition, so Arnold may opt to give them another chance.

Ellyes Skhiri may have to wear a protective face mask again as the 48-cap midfielder continues to recover from a cheekbone fracture.

Coach Jalel Kadri is unlikely to make many changes. "We are in strong group and we have one point," he said following the draw with Denmark. "This will give us energy for the next game."

Kadri is determined to oversee qualification for Tunisia, who were more convincing than Australia in their opener and are firm favourites to win this match without being sure enough for an odds-on price, according to the bookmakers.

With one goal between them so far, under three goals is also favoured, but the odds on more goals could appeal given that both nations are likely to be more open in a game both may see as their most winnable of the group stage.