How to watch Qatar vs Senegal at World Cup in USA 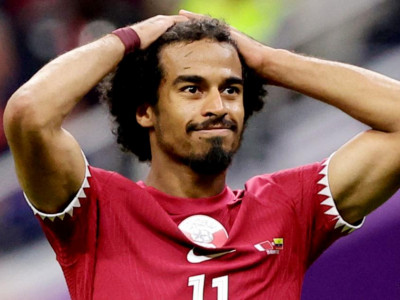 Qatar suffered a punishing false start at their home World Cup and will be looking to make amends when they face Senegal in Group A.

Expectations had been steadily building around Felix Sanchez's Asian champions, who had the benefit of a lengthy pre-tournament training camp. But they fluffed their lines on the opening night of World Cup 2022, as Enner Valencia struck twice in the first half for Ecuador, who showed their superior pedigree at the highest level to breeze to a 2-0 win.

Significant numbers of home fans headed for the exits before fulltime, and Sanchez's men will hope to give them something to shout about this time around.

Senegal were also beaten 2-0 by Louis van Gaal's Netherlands but, by contrast, were entitled to feel hard done by.

The Lions of Teranga gave as good they got in a tight contest that was decided by late goals from Cody Gakpo and Davy Klaassen. Chelsea goalkeeper Edouard Mendy will not look back with too much pride at either of those.

For both teams, there is no further room for error, with Qatar battling to avoid the ignominy of being the second side to be eliminated at the group stage of their own World Cup, following South Africa in 2010.

Here's how you can watch all the action in the USA in what is a high-stakes encounter.

The 2022 World Cup will be televised in the United States in English by Fox Sports and in Spanish by Telemundo.

For English-language coverage, FS1 will show Qatar vs Senegal on Fox. Fox's play-by-play coverage will feature JP Dellacamera and Cobi Jones. Dr. Joe Machnik will be on hand to analyze refereeing decisions.

For Telemundo's Spanish-language coverage, the lead play-by-play broadcaster will be none other than the legendary Andres Cantor, covering his 12th World Cup. He will be partnered with former Mexican national team player Manuel Sol. Other play-by-play broadcasters for Telemundo coverage include Copan Alvarez, Sammy Sadovnik, and Jorge Calvo. They will all be partnered with analyst Eduardo Bsicayart, who will be covering his fifth World Cup.

Viewers in both English and Spanish can view their respective coverage on fuboTV, with both FS1 and Telemundo available to stream. New U.S. viewers can access fuboTV for a limited time with a free trial.

With all World Cup matches being shown in English on Fox, FS1, and FS2 in the United States, Fox will also make the matches available on the company's streaming outlets, with a viable login.

The Qatar vs Senegal match is available to stream for free in the United States.

Viewers in both English and Spanish can view their respective coverage on fuboTV, with both FS1 and Telemundo available to stream. New U.S. viewers can access fuboTV for a limited time with a free trial.

Additionally, NBC made their Spanish-language broadcasts for the first 12 matches of the tournament accessible for free on Peacock, although that offer has now passed.

The 2022 World Cup will be televised in the United States in English by Fox Sports and in Spanish by Telemundo.

Fox will spread the matches across its family of channels, including FS1 and FS2. While most of the channel designations are set, Fox does have the ability to switch its assignments around, particularly for the final round of group-stage fixtures depending on which matches carry the most importance for knockout stage places.

Meanwhile, Telemundo will be the home of all Spanish-language World Cup broadcasts in the United States. The only exception will come in the final round of group stage matches, when games are played simultaneously. For those matches, one will be pushed to Universo. All Spanish-language World Cup match broadcasts can be streamed on Peacock Premium as well.