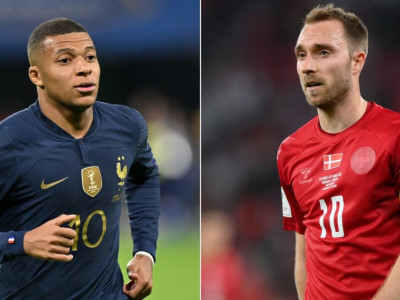 France are targeting Group D qualification at the 2022 World Cup when they meet a Denmark side looking for their first win following a 0-0 draw against Tunisia in their opener.

The Euro 2020 semifinalists failed to break down the Eagles of Carthage before Les Bleus made a surprise start to the tournament by falling a goal behind after nine minutes against Australia.

Olivier Giroud scored twice and Adrien Rabiot and Kylian Mbappe were also on the scoresheet to give France a 4-1 win and put them top of the table ahead of their second match in Qatar.

The match will take place at Stadium 974 in Rass Abu Aboud, which opened in November 2021. Kickoff is at 7 p.m. local time.

France's fearsome list of injuries has become a story in itself, with the likes of Ballon d'Or winner Karim Benzema and influential midfielder Paul Pogba forced out of the tournament.

Left-back Lucas Hernandez became the latest victim when he suffered an ACL rupture while trying to stop Australia from scoring. His brother, Theo, could replace him.

Thomas Delaney sustained a hamstring injury before being replaced by Mikkel Damsgaard during the first half of Denmark's game against Tunisia.

The Sevilla midfielder was later ruled out of the tournament and will undergo a four-week rehabilitation period.

The reigning champions are odds-on to gain revenge against opponents who beat them twice in the UEFA Nations League this year.

Denmark are being tipped by some to go far at the finals and are likely to provide France's toughest test of the group stage, with the Tunisia stalemate representing only the third game in their most recent 21 in which they have not scored.