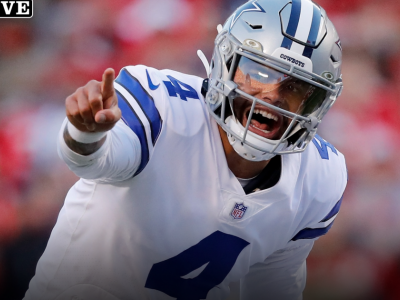 NFL fans are in for a treat on Thanksgiving, and it won't just be the turkey. They will get to see two teams from the NFL's best division square off in what could end up being the best game of the holiday.

The Cowboys are playing host to the Giants on Thanksgiving in a battle of 7-3 teams. They are tied for second place in the NFC East behind the 9-1 Eagles while each holds a 1.5-game lead over the last-place Commanders.

Needless to say, this game will go a long way toward determining which team will have the ability to challenge the Eagles for the top spot in the division. It also could be key in potential tiebreaker scenarios between the teams as they jockey for wild-card positioning.

The Cowboys beat the Giants 23-16 on "Monday Night Football" in Week 2. That was with Cooper Rush at quarterback. Now, the team will have Dak Prescott behind center, so they should, in theory, fare well against a Giants defense that is banged up at cornerback.

Plenty of star power will be on display in this contest, as Prescott, CeeDee Lamb, Ezekiel Elliott and Tony Pollard go up against a resurgent Saquon Barkley.

Sporting News is tracking live scoring updates and highlights from Giants vs. Cowboys on Thanksgiving. Below are the key moments from the 2022 Turkey Day showdown.

7:28 p.m. — The Giants are keeping the chains moving, and a Matt Breida run allows them to cross midfield. However, there are now under 6 minutes remaining, and the Giants are still down two possessions.

7:26 p.m. — The Giants are looking to answer the Cowboys, and they got a first down via a Saquon Barkley run. They need to work quickly, as they are down 15 with about half of the fourth quarter remaining.

7:23 p.m. — TOUCHDOWN. The Cowboys run a jet sweep to tight end Peyton Hendershot, and he takes it two yards in for the score. Brett Maher makes the extra point and the Cowboys are up 15.

7:19 p.m. — Mike McCarthy is challenging the Cowboys' first-and-goal play, as CeeDee Lamb nearly tapped his toes in to get a touchdown. However, his heel came down after his second toe hit in bounds, so this is unlikely to be overturned.

7:17 p.m. — The Cowboys were facing a second-and-23, but a big run by Tony Pollard and a pass to CeeDee Lamb allows them to convert. The Cowboys are now at the 2-yard line with a first-and-goal.

7:13 p.m. — The Cowboys are moving the ball at will now. Jake Ferguson catches a 30-yard pass and he manages to hurdle a Giants defender. The Cowboys are in field goal range, threatening to score again.

7:10 p.m. — Jones can't connect with Saquon Barkley on third down, and the Giants are facing a fourth-and-9. They punt the ball back to the Cowboys, but it goes through the end zone through a touchback.

7:06 p.m. — The Giants carry the ball twice more, but it results in just one yards. They will face a third-and-9 when the fourth quarter opens.

7:04 p.m. — The Giants start off their next drive with a couple of big runs by Gary Brightwell of 15 and 11 yards. They are now at midfield with 1:14 left in the third quarter.

One #Thanksgiving TD wasn't enough for @BinghamBaller9. Had to go back for seconds! 🍽📺: @NFLonFOX | #NYGvsDAL pic.twitter.com/X7cRw4H8tN— Dallas Cowboys (@dallascowboys)

7:00 p.m. — The Cowboys are called for yet another false start. That moves their first-and-goal opportunity back to the 10-yard line.

6:58 p.m. — CeeDee Lamb makes an incredible one-handed catch while being interfered with to get the ball inside the 5-yard line. The Cowboys are threatening to widen their lead.

6:56 p.m. — On the ensuing play, Prescott is able to find tight end Jake Ferguson over the middle of the field for a 14-yard gain. That puts the Cowboys in field-goal range.

6:54 p.m. — Prescott and the Cowboys go for a big play off the turnover, but Rodarius Williams breaks up a 43-yard pass to Michael Gallup on the 1-yard line. Williams turned around just in time to avoid a penalty.

6:51 p.m. — Saquon Barkley picks up about five yards on third-and-6 and sets up a fourth-and-1. Brian Daboll decides to go for it, but Daniel Jones throws a pass low to a wide-open Saquon Barkley. The back is unable to make the catch, so Dallas will take over on New York's 44-yard line.

6:50 p.m. — The Giants picked up a first down, but Jones is sacked on second-and-5 on the next sequence of downs. Third-and-6 upcoming for New York.

6:49 p.m. — The Cowboys drive took more than half of the third quarter to run. The Giants will look to answer with a similarly long and fruitful drive.

6:43 p.m. — TOUCHDOWN. On third-and-goal from the 15-yard line, Prescott finds Dalton Schultz one-on-one with Nick McCloud and Schultz is able to high point the ball and catch it. Brett Maher makes the extra point, and the Cowboys take their first lead of the game, 14-13.

BOOM. @dak finds @BinghamBaller9 and the #DallasCowboys have the lead!📺: #NYGvsDAL on FOX📱: Stream on NFL+ https://t.co/6zODjip4a7 pic.twitter.com/RlDMPb2J04— NFL (@NFL)

6:35 p.m. — After a couple of injury timeouts and two plays, Tony Pollard takes a carry five yards up the middle for a first down. The Cowboys are on the Giants 22-yard line and threatening to cut into New York's 6-point lead.

6:30 p.m. — Prescott misfires to CeeDee Lamb over the deep middle of the field on third down, but the Giants are whistled for a questionable holding penalty. That gifts the Cowboys a first down instead of them having to settle for a long field goal.

6:27 p.m. — Ezekiel Elliott continues to have a nice day against the Giants defense. He cut back on a third-and-2 and was able to turn the carry into 16 yards.

6:22 p.m. — Dallas will receive the second-half kickoff when it occurs. That will give them a chance to cut into New York's lead.

6:18 p.m. — The Cowboys actually outgained the Giants in the first half 208-160. So why are the Giants winning? Dallas threw two turnovers and had a turnover on downs. That helped the Giants maintain an advantage.

6:10 p.m. — The Jonas Brothers are the halftime entertainment for the Cowboys-Giants game. In case you're wondering why, click here.

6:03 p.m. — The Giants run three more plays to run the clock down to three seconds. They gain seven yards and set up Graham Gano for a 47-yard field goal. The kick is good, even after the Cowboys iced the kicker, and gives the Giants a 13-7 halftime lead.

6:01 p.m. — Jones finds tight end Tanner Hudson over the middle of the field for a gain of 10 yards. The ball is on the Dallas 36-yard line with 23 seconds left. The Giants are now out of timeouts after using their last.

5:59 p.m. — The Giants move across midfield thanks to a catch over the middle by Darius Slayton. Then, a Daniel Jones scramble get them close to field goal range with 29 seconds left in the half.

5:57 p.m. — Donovan Wilson answers Prescott's interception by intercepting Jones. However, it's called back by an illegal contact penalty. That gives the Giants their second automatic first down in the last two plays.

5:52 p.m. — Dak Prescott looks for CeeDee Lamb over the middle of the field on third-and-long, but Darnay Holmes breaks up the pass. Julian Love catches it off the deflection, giving the Giants their second interception of the game and taking away Dallas' chances at a game-tying field goal.

5:49 p.m. — The Cowboys tried a reverse with Tony Pollard on a second-and-11. The Giants sniffed it out with ease and tackled him for a four-yard loss. The Cowboys are facing a third-and-15 as we head to the two-minute warning.

5:46 p.m. — Prescott completes a pass to CeeDee Lamb for a first down, but rookie tackle Tyler Smith is penalized for holding. That sets up the Cowboys with a third-and-14. They fail to convert that, but an illegal contact penalty on Darnay Holmes gives them a first down.

5:43 p.m. — The Cowboys call their first timeout with 3:52 left in the second quarter. They are facing a third-and-4 and time was running low on the play clock. The ball is on New York's 25-yard line.

5:40 p.m. — Prescott continues to find Michael Gallup open. He has two catches for 40 yards on this drive, and the Cowboys are at the 31-yard line, threatening to score.

Gallup is having a DAY. @michael13gallup📺: #NYGvsDAL on FOX📱: Stream on NFL+ https://t.co/6zODji6UVZ pic.twitter.com/OsMTPGfVsL— NFL (@NFL)

5:39 p.m. — Jones has struggled with his accuracy at times in this one. He has typically been outside on his throws, and that's part of why he has gone 6 of 12 passing to start the game.

5:35 p.m. — Daniel Jones does a nice job stepping up with Micah Parsons screaming off the edge on a third-down pass rush,