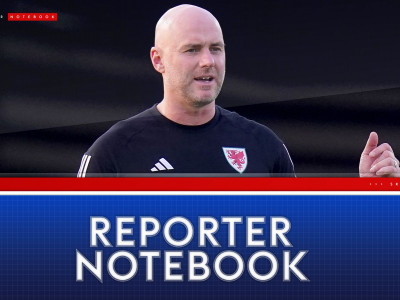 Even though the game was draining physically on Monday against the USA - a game where the players actually played closer to 105 minutes of football rather than 90 minutes - all 26 Wales players are fit and ready for Iran.

Both Neco Williams and Ethan Ampadu came off after a good few solid challenges on Monday so there was certainly some concern, but the medical staff have worked their magic (is it still a magic sponge?!) and, after a recovery day on Tuesday, both were able to take part in training on Wednesday and Thursday.

The biggest bonus, though, is somehow Joe Allen. He has passed a fitness test and is in the mix for selection, surely he will play?

Rob Page revealed that they took a massive risk with Allen by bringing him to Qatar, but just a few days ago pushed him to a 100 per cent in a test to see if his hamstring coped. High risk stuff as if the hamstring had gone 'twang' that would be his World Cup over. A big gamble that, so far, has paid off, but can he do 90 minutes?

Gareth Bale and Aaron Ramsey to my eye, which is not as sharp as any coach granted, but I've seen enough training sessions to know, look in pretty decent shape. Another big phew for all Wales supporters.

And so to selection and formation. I cannot see Page moving from his preferred back three to a back four, but I do expect some personnel changes.

Joe Allen to start would be one and then who else plays in the offensive roles alongside Ramsey and Bale? Kieffer Moore showed how well he is playing the other night, plus opponents seem to be fearful of playing against him.

The other options are also whether Brennan Johnson gets a start - he looked bright and sharp when he came on as a sub in the second half against the USA on Monday.

Wales need bright and sharp. It is no longer a must-not-lose match. If Wales want to qualify from the group and have their destiny in their own hands, it's a must-win game.

Further to that, it is probably best Wales, if they can dominate Iran, get goals. Already goal difference could be a factor in this group.

Bale is set to overtake Chris Gunter, who will be among the substitutes for Friday's encounter, and win his 110th cap at the Ahmad Bin Ali Stadium in Doha.

Bale, who made his Wales debut in 2006 and is his country's record scorer with 41 goals, said: "I haven't really been focusing on the cap thing to be honest, just trying to focus on the game.

"On a personal level it's an amazing achievement, it's an honour to represent my country so many times.

"But it's more important that we try and get the victory. Hopefully we can and it'll make it even more special."

Bale played the entire game against the USA having admitted in the month leading up to the World Cup that he had been dealing with a "few little issues" after playing just 30 minutes of football before the USA opener.

But Wales boss Page, asked at his own pre-match press conference about the possibility of resting Bale against Iran, said: "Good luck not picking him."

Page insisted the 33-year-old was ready for Wales' second group game, even if the player himself admitted such an energy-sapping match to open with was not ideal due to the quick turnaround in fixtures.

Bale said: "I'm feeling OK, obviously it took a few days before I could feel my legs again.

"But we are professionals, we try to recover and do the best we can. Playing 104 minutes, or whatever it was, isn't ideal when you've got a game four days later.

"Everyone is doing all they can to recover for the next game. I've not played loads before I came here, but I've dealt with it before and it won't be a problem."

Wales vs Iran - Friday, kick-off 10am

If Wales finish second in Group B...