England reporter notebook: Gareth Southgate to stick with the team which beat Iran against USA 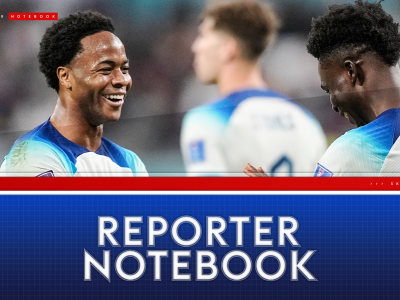 Gareth Southgate is expected to name an unchanged England starting line-up for Friday's World Cup Group B clash against USA, Sky Sports News has been told.

The old adage 'don't change a winning team' will be ringing loud in Southgate's mind, such were the positives to come out of the 6-2 victory over Iran.

And - James Maddison aside - the rest of the squad have been given a clean bill of health with everyone available for selection.

Seeing captain Kane out there training, without any strapping on his troublesome right ankle and moving freely and seemingly pain-free, is the biggest plus for the England boss.

Kane is England's only irreplaceable. The one man whose absence dramatically weakens an England starting XI. He will start. As will Harry Maguire, who will win his 50th international cap.

Probably the most controversial selection in both Southgate's original squad announcement, and again when he got the nod to anchor the defence against Iran on Monday - Maguire recovered from the illness which forced him off at the Khalifa International Stadium.

Southgate rarely tinkers with his defence if it's performing well, and while there were concerns about how easily a demoralised Iranian attack managed to penetrate in the second half, scoring one poorly-marked goal and a dodgy penalty, I'd expect England to stick with a flat back four.

That formation allows for an extra man in midfield, which could be critical as they try to counter the energy levels and running of the US team.

He scored his first England goal and his country's first goal of this tournament against Iran. More importantly, he brought a mobility and energy to England's midfield that will be crucial against the Americans.

He was player of the match against Iran, and could prove to be one of England's most important players as the tournament progresses.

Bellingham is the traditional No 8 that England have been lacking, and looking for, for many years. A proper box-to-box player with a fine-tuned engine and an aptitude for attack as much as defence.

He has made himself undroppable.

The same can be said of Bukayo Saka. Outstanding all season so far to help Arsenal to the top of the Premier League, he continued that form for England.

His two goals - both brilliantly taken - were a bonus, and it would be a brave (or foolish) person who doubts that he will keep his place on the right wing.

Unless there are fitness issues behind the scenes that Southgate hasn't revealed, maybe the only area where he has a significant decision to make is at right back.

Right-back Walker has proclaimed himself fit and ready to play, after undergoing groin surgery at the start of last month. His pace could be a real bonus against USA, whether England go with three centre-backs or a flat four.

Not that Trippier did anything wrong against Iran. He was a solid seven out of 10, as he always is, and his dead ball ability offers a dangerous option at set pieces. The Newcastle defender was substituted after a heavy challenge in the second half left him floored on Monday.

There are credible reasons for Walker and Kalvin Phillips to both be given some game time, as they need minutes in their legs to continue their rehabilitation from surgery.

But with the luxury of five substitutes per game, it may well be that their involvement will be off the bench for now.

Southgate will also be acutely aware that, should England beat USA, they will qualify for the knockout stages of this World Cup with a game to spare - a game (against Wales) that would give him the luxury to give many other players in the squad a run-out.

Only once during the Euros, when England went all the way to the final, did Southgate make more than two changes to his starting XI, compared with the previous game.

You'd expect him to use a similar philosophy in Qatar, and so if England continue to perform well, there may well be a consistency to his team selection from match to match.