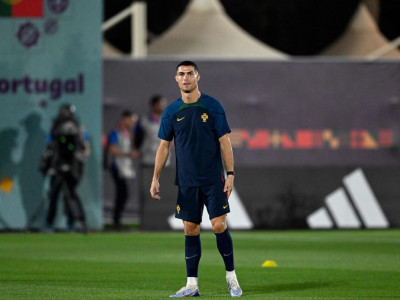 The summer transfer window is closed for the major leagues in Europe. However, with an eye on January, there's plenty of gossip swirling about who's moving where. Transfer Talk brings you all the latest buzz on rumours, comings, goings and, of course, done deals!

Chelsea have no plans to sign Cristiano Ronaldo as they have a deal for RB Leipzig's Christopher Nkunku wrapped up, according to The Evening Standard.

Just as Ronaldo's Portugal start their World Cup campaign against Ghana on Friday, there will be plenty of talk around the forward's future after Manchester United ripped up his contract by mutual consent.

Chelsea had been linked with the 37-year-old through summer, but former coach Thomas Tuchel knocked back club owner Todd Boehly's suggestion to sign him.

With Graham Potter now in the dugout at Stamford Bridge, it is reported that Ronaldo wouldn't fit the style of play being implemented, and there are still no plans to sign him.

The Blues have moved to bring in Nkunku and are reportedly confident of sealing a £50 million transfer for the 25-year-old. Sources told ESPN earlier this season that Chelsea have attempted to secure an advantage in the race to sign Nkunku by arranging for the striker to undergo medical tests.

Any signings in the forward areas would rely on departures, with Hakim Ziyech wanted by AC Milan and Christian Pulisic receiving attention from Juventus.

As sources have told ESPN, Newcastle United are also no interested in signing Ronaldo, despite the Red Devils putting no restrictions on where the forward can go next.

There is expected to be strong interest from the Middle East, with an unnamed Saudi Arabian club having offered a contract worth £2m per week earlier this year.

In a video on his YouTube channel, Fabrizio Romano said that Real Madrid have also ruled themselves out of the race for Ronaldo.

- Juventus could opt to send Leandro Paredes back to Paris Saint-Germain in the summer and offload Weston McKennie for €25m-€30m to help them sign Lazio's Sergej Milinkovic-Savic, reports Calciomercato. Adrien Rabiot's contract ends at the end of the season, and whether or not he is signed to a lucrative new deal could also impact the Bianconeri's ability to sign the Serbia international.

- Christian Falk has said that RB Leipzig midfielder Konrad Laimer said no to a Chelsea move and wants to join Bayern Munich in the summer. The Austria international has been with Die Roten Bullen since 2017 but is set to depart as a free agent when his contract expires at the end of the season.

- Internazionale are hoping to sign a left-back who can replace Robin Gosens with the German's January departure seeming increasingly likely, and Gazzetta dello Sport has said that the Serie A outfit are looking at Stade Rennais' Adrien Truffert. Scouts have watched the 21-year-old 11 times and come back with positive reports on each occasion, although he is valued at €15m.

- Aston Villa, Fulham and Juventus are all monitoring the situation of Benfica centre-back Antonio Silva, according to Ekrem Konur. The 19-year-old has enjoyed a breakthrough season that has earned him a place in the Portugal squad for the World Cup.

- TSG Hoffenheim are looking to sign a new striker and have Wolfsburg's Luca Waldschmidt in their sights, as reported by Kicker. It is suggested that first contacts have taken place for the 26-year-old, who has managed just 322 minutes across all competitions this term and is yet to record a direct goal contribution.