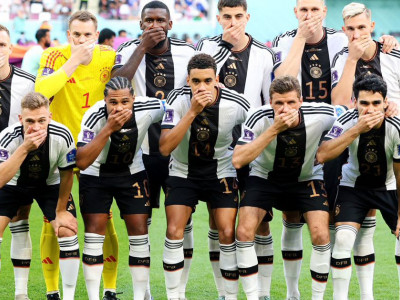 The German national team took a stand on Wednesday to protest FIFA and Qatar at the World Cup. Players posed and covered their mouths ahead of the team’s opener against Japan, in response to being banned from wearing armbands with read “One Love,” and featured a rainbow heart — a move designed to stand with the LGBTQ+ community.

Incredible: German National Team cover their mouths in Protest, to make it clear to the World they were silenced by FIFA who prevented them from wearing OneLove Armband at World Cup. Footballers using their platform for the Force of Good pic.twitter.com/c4S5OO080Q— roger bennett (@rogbennett)

The “One Love” armbands were arranged as a display by several European countries to show their support for the LGBTQ+ community in the face of Qatari law, which imprisions individuals engaging in homosexuality, and could result in the death penalty. FIFA preemptively banned the armbands, in a continuation of their absolute capitulation to the host nation on everything even tangentially related to their laws.

To be clear: Armbands reading “One Love” aren’t against the law, but FIFA is cracking down on anything which would even spark a conversation about Qatar. Shirts with rainbows on them have also been banned from stadiums as part of the FIFA crackdown.

It wasn’t just the German players on the pitch who took a stand. Nancy Faesar, a German minister in attendance refused to take off the armband.

German Minister Nancy Faeser is at the game wearing the Armband. Here she is sitting by Gianni Infantino who busy pretending to be too busy writing another bonkers speech to notice. Sports is always Political but this World Cup is the most Political I have witnessed pic.twitter.com/qS27Gfn6Fl— roger bennett (@rogbennett)

FIFA’s decision to side with Qatar over the teams who actually play is coming back to bite them in a major way. This World Cup was always going to be a shit show, but this is already going down as one of the biggest sporting disasters in recent memory. Germany is set to sue FIFA over banning their OneLove armbands, which resulted in them losing a major sponsor — while The Athletic is reporting that Denmark is considering forfeiting the cup and walking out all together, with other UEFA teams potentially joining them.

Everyone saw this coming. FIFA put its ravenous desire for money over everything else, like it always does, but might have passed the tipping point by giving the World Cup to Qatar. We’ll need to wait to see how this plays out in the coming days.