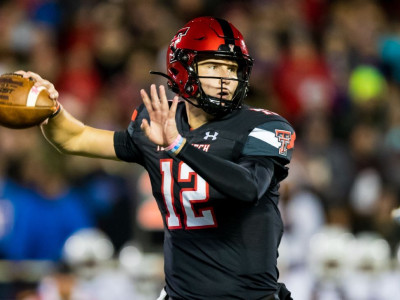 "Stanford Steve" Coughlin and Chris "The Bear" Fallica preview Week 13 of the 2022 college football season as only they can, offering their top bets, nuggets and totals worth wagering on.

Odds and lines are from Caesars Sportsbook unless otherwise noted.

Stanford Steve: Red Raiders head coach Joey McGuire has built some serious momentum this year with what he and his staff have done in recruiting. What else would help would be if they got a sweep of Texas and Oklahoma on the field this season. Lubbock will be rocking for this one. We'll take the home team plus the points.

Pick games every week and compete for prizes! Make Your Picks

Stanford Steve: Before the season, I gave out Indiana under 4.5 wins. We're just going to be greedy and see if the Hoosiers can lose to cash the win total cover while doing so. Take the road team plus the points.

The Bear: You know if given the chance, James Franklin will show no mercy on the scoreboard. Penn State has handled everyone other than Michigan and Ohio State, winning its past three games by 31, 30 and 45. Expect another rout here over a team that managed to give up 39 to Indiana in a loss last week.

The Bear: How will Tennessee react after a dream-crusher type loss and a devastating injury to its QB Hendon Hooker? Vanderbilt can reach a bowl game with a win. This is one of those bets you have to be willing to lose, because if the Vols are hard-pressed to bounce back after last week's loss, there's a chance the Commodores won't just cover, they might win.

Stanford Steve: Fresh off a crushing loss in a rivalry game, I'm interested to see what Stanford comes out like. BYU will use this as opportunity to get a win versus a Power 5 team. Cougs quarterback Jaren Hall and his 29 touchdown passes will be the difference. We'll take the road team and lay the points.

The Bear: Clemson still entertains CFP hopes and it has a great situation this week as South Carolina comes in off a massive, unpredictable upset of Tennessee. That should have Dabo Swinney's team on full alert -- it will hear all week about the dangerous Gamecocks and I believe it will be extremely difficult for South Carolina to come close to repeating that out-of-the-blue offensive effort against the Clemson D. I'll be laying the points.

The Bear: Five of the Tigers SEC games have been of the one-score variety and Missouri has one more chance to become bowl eligible. This spot screams Missouri as I believe Arkansas had its game last week when it blew out Ole Miss one week after the Razorbacks came up just short vs. LSU. The Tigers defense should be a much stiffer test for Arkansas and I give them an excellent chance to win.

Like some big favorites but don't want to lay the points? Here are some to parlay together.

No. 3 Michigan Wolverines at No. 2 Ohio State Buckeyes

There have been six games this season between top-10 opponents. All six games have been won by the home team, with the five favorites each winning by double digits. Tennessee was an underdog when the Vols beat Alabama.

Each of the past eight meetings have gone over the total.

Ohio State has played 16 Big Ten home games under Ryan Day, and only two have been decided by 11 points and none has been decided by fewer than seven points. This will be the first time Ryan Day will face Michigan at Ohio Stadium.

No. 15 Notre Dame Fighting Irish at No. 6 USC Trojans

Each of USC's and Notre Dame's past five games have gone over the total. The is the first time since 2016 -- and third time in the past 11 meetings -- that USC is favored over Notre Dame.

Clemson has won seven straight vs. the Gamecocks, with only one coming by fewer than 18 points. This is the seventh straight year Clemson is at least an 11-point favorite over South Carolina. The Gamecocks have scored 10 or fewer points in four of the past five meetings.

No. 9 Oregon Ducks at No. 21 Oregon State Beavers

Oregon State has been an underdog four times this season, and three of those games have been decided by exactly a field goal.

There haven't been many upsets lately in the "Civil War." Only twice in the past 13 years has the underdog won outright -- but both instances were Oregon State winning in Corvallis as an underdog.

This is the first time in Big 12 play TCU enters a game with a double-digit spread. Six times the Horned Frogs entered as a single-digit favorite and twice they entered as an underdog. The only time this year Iowa State was a double-digit underdog, the Cyclones lost 24-21 at Texas.