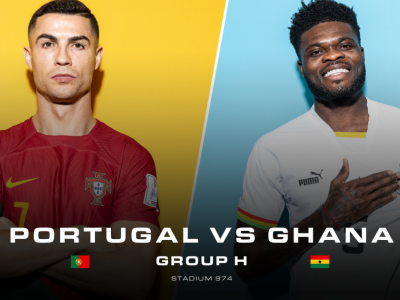 All eyes will be on one man when Portugal take on Ghana in Group H at Stadium 974, with Cristiano Ronaldo set to once again dominate all the attention.

The Portugal icon comes into the match looking to put a troubled week behind him with his, and his country's, build up to what will surely be the 37-year-old's last tilt at World Cup glory disrupted by the fallout from his acrimonious Manchester United exit.

Ronaldo can rarely stay out of the headlines for long, but he must now hope that his on-the-pitch exploits are what draw the focus as Fernando Santos' side seek to better their run to the Round of 16 in Russia four years ago.

Ghana will present no pushovers. The Black Stars have a squad filled with talent and plenty of stars of their own — not least Arsenal's Thomas Partey — and they look arguably the most capable of all the African challengers.

The Sporting News is tracking live scoring updates and highlights for Portugal vs. Ghana at the 2022 World Cup. Follow below for complete results from the Group H match in Qatar.

3 hours from kickoff: It's set to be a tricky afternoon for Ghana after winning just three of their 14 internationals throughout 2022 (D5, L6 - including friendlies), Ghana enter the World Cup in poor form.

Given that form, the African nation are now ranked 61st in the world by FIFA, their worst ranking since being 77nd all the way back in 2004.

3 hours 50 from kickoff: So if you're wondering what we're on about in terms of Ronaldo dominating the headlines of late and you've been living under a rock these last few weeks, let's fill you in so you're up to speed.

Earlier this month, Ronaldo gave an explosive interview to Piers Morgan in which he criticised the club owners and his manager Erik ten Hag.

United made it clear they weren't happy with the comments and just a few days later the club announced they had mutually agreed to terminate his contract.

4 hrs 30 from kickoff: Hello, and welcome to The Sporting News' live coverage of the Group H clash between Portugal and Ghana. This one looks set to be dominated by one man, with Ronaldo likely to get all the attention. But will Ghana upstage him and pull off a shock? Let's find out!

Fernando Santos faces a bit of a coin toss for his starting goalkeeper and Porto's Diogo Costa might get the nod over long-serving No.1 Rui Patricio. In veteran defender Pepe and Ronaldo, the Portugal XI is still likely to boast a couple of cap centurions.

According to Portuguese sports paper Record, Santos is toying with the idea of fielding the attacking midfield quartet of Joao Felix, Bernardo Silva, Bruno Fernandes and Rafael Leao behind Ronaldo.

Paris Saint-Germain's Nuno Mendes is a doubt. If he doesn't make it, expect Joao Cancelo to start at left-back, with Diogo Dalot in the other full-back position.

Both Kamaldeen Sulemana and Daniel Kofi Kyereh have been named in Ghana's World Cup squad despite injury concerns. Expect both Ayew brothers, Andre and Jordan, to both start in this one, along with recent call-ups Tariq Lamptey and Inaki Williams.