Everything to know about Neymar: Trophies, contract, salary and more 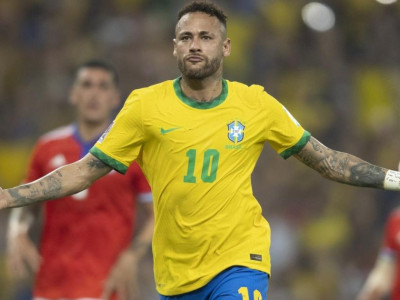 Brazilian forward Neymar, currently playing for French club PSG, is considered one of the best players in the world.

Considered a prime dribbler, Neymar has grown into a superstar at the club and international level. He has won a UEFA Champions League with Barcelona, and leads Brazil into the 2022 FIFA World Cup as the favorites to win the tournament.

Thanks to his on-the-ball skills, Neymar is one of the world's most fouled players year after year. With that, he has garnered a reputation as an over-embellisher, which has made him a divisive figure amongst fans.

The Sporting News brings you all the details of Neymar's career at the club and international level as he searches for Champions League and World Cup glory.

Neymar is only behind teammates Kylian Mbappe and Lionel Messi amongst the highest-paid players around the globe.

Neymar has been one of the world's best players, winning a UEFA Champions League with Barcelona and hoisting multiple league titles in Spain and France.

The Brazilian began his career at domestic side Santos before moving to Barcelona in 2013 and to PSG in 2017. He won a Puskas Award for goal of the year in 2011, launching him onto the global scene.

However, his individual awards are paltry for a player of his abilities, often due to the fact he has played on teams featuring Lionel Messi, Kylian Mbappe, and other global superstars who often steal the limelight.

* The 2019/20 Ligue 1 season was cut short due to COVID-19 and the final table was calculated using points per game rather than a raw point total.

Neymar, now 30 years old, has had a sensational career at the club level, reaching the greatest of heights in the European game.

Hailing from Sao Paulo municipality Mogi das Cruzes, Neymar began his youth career with local club Santos in 2003, joining the club at the age of 11. He made his professional debut in March of 2009 at just 17 years old, coming on for a 30-minute cameo against Oeste. He scored his first goal just a week later against Mogi Mirim, and finished with 14 goals in 48 games across his first career season.

He won the FIFA Puskas Award for goal of the year after scoring a stunning dribbling run through four Flamengo defenders in a 5-4 league defeat.

With the 2014 World Cup on the horizon, Neymar made the move to Barcelona for a €86.2 million fee. The transfer was controversial as the initial reported fee was tens of millions of dollars below the actual amount, with a massive fee paid to Neymar's parents. This triggered a charge of tax fraud for Barcelona and team president Josep Maria Bartomeu, which resulted in the club paying a €4.4 million fine.

Neymar grew into one of the world's best players at Barcelona, forming a formidable strike force alongside Lionel Messi and Luis Suarez that won the 2014/15 Champions League as part of a famous treble. They won the Spanish top flight the following two seasons as well, and Neymar played his part in one of the most famous Champions League comebacks ever as they turned around a 4-0 first-leg deficit to PSG in the Round of 16 with a 6-1 second-leg victory.

Eventually, Neymar forced a move to PSG in August of 2017, fronting €222 million of his own money to trigger his own release clause — in Spain, release clauses can only be activated by the player himself. This still stands as the most expensive transfer in world football history.

He joined PSG on a five-year contract, to help the French club on its search for a Champions League crown. Despite domestic dominance, PSG reached the UCL final only once, falling to Bayern Munich in 2019/20. Neymar's former Barcelona teammate Messi joined in the summer of 2021 to help in the cause.

Neymar's career with Brazil has not gone quite to plan. For a national team that considers itself the best in the world, he has only won one major trophy, the 2013 Confederations Cup, where Neymar scored in four of the five matches, including the final victory over Spain.

Since then, he's fallen short with every attempt. Brazil won the 2019 Copa America on home soil, but Neymar was not part of the squad having suffered an ankle injury in the run-up to the tournament that ruled him out.

Neymar was kept out of the 2016 Copa America by his club Barcelona, only allowed to play in the Olympics, where he helped lead the team to a gold medal. However, without him, Brazil crashed out of the Copa America in the group stage.

He found his way onto the field more consistently after that, but was powerless to keep Brazil from a few gut-wrenching losses. They suffered a quarterfinal elimination in the 2018 World Cup with a 2-1 loss to Belgium, and bowed out in the 2021 Copa America with a 1-0 final loss to Argentina. Neymar failed to score in both games.

The Brazilian was an ambassador for Nike's Jordan Brand, but switched to represent Puma in 2020. The change was notable as Neymar had a 15-year association with Nike. Reports indicate that Neymar's endorsement deal with Puma nets him an incredible €25 million a year.

Neymar has been featured in endorsement deals with Beats Electronics, Gillette, Mastercard, and McDonald's in the past.

Neymar, or Neymar da Silva Santos Junior in full, was born in Mogi das Cruzes, Sao Paulo, Brazil in February of 1992. His father, Neymar Sr, is his agent, having served as his advisor from when Neymar Jr was a young age. His mother, Nadine Goncalves, who is popular on social media, split from Neymar Sr in 2016 and has since been publicly dating Tiago Ramos, who is 29 years younger.

The Brazilian star is unmarried, and is not currently dating anyone publicly. His most recent relationship was with Bruna Biancardi, a Brazilian social media influencer. The two were engaged for a time, but reports indicate that their relationship ended in August 2022.