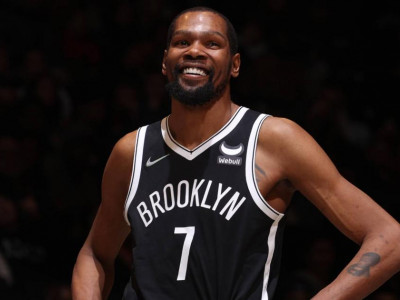 After an offseason complete with the turmoil that comes with a trade request, Nets superstar Kevin Durant was back in Brooklyn for media day to gear up for his third season on the court with the franchise. As you would expect, Durant was asked a number of questions about the happenings of the offseason, to which he provided honest responses about what led to his discontent and where things currently stand. What did Kevin Durant say at Nets media day? And what does a tumultuous summer mean for the future of the franchise? Durant provided insight and clarity on what's happened in the past and what could come in the future. MORE: Kevin Durant's return is last piece of Nets' championship puzzle Durant addressed the elephant in the room, telling reporters that his frustration stemmed from inconsistency and roster turnover. In 2021, Durant signed a contract extension with the franchise due to the direction he felt things were heading, but a number of changes, including a trade demand from James Harden, changed the entire outlook Here's more from Durant: There was a lot of uncertainty around our team last year. I committed to this organization for four years last summer with the idea that we were going to play with that group that we went on that run to the second round with (in 2021)… …I want to be in a place that's stable and trying to build a championship culture and I had some doubts about that and I voiced them to (team owner) Joe (Tsai) and we moved forward from there. “There was a lot of uncertainty around our team last year… We came to a mutual agreement that we should keep moving forward.”-Kevin Durant on his offseason with the Nets. #NBAMediaDay pic.twitter.com/dlYEGmeoPP— NBA TV (@NBATV) MORE: Durant trade request timeline: Rehashing offseason saga with Nets One of Durant's most famous quotes came while he was a member of the Warriors, as he told reporters "I'm Kevin Durant. Y'all know who I am," as a reminder of how good he is. Durant echoed a similar sentiment at media day on Monday. When asked if he was surprised to be a Net, Durant said "I know I'm that good that you're not just going to give me away. I know who I am," adding that he was pleased with Nets management for not settling for a lesser deal to honor his trade request. It all worked out in the end. Is Kevin Durant surprised that he's still a Net?"No. I know I'm that good that you're not just going to give me away. I know who I am." pic.twitter.com/tShm3swMYk— Nets Videos (@SNYNets) MORE: The most interesting things Ben Simmons said on JJ Redick's podcast Despite signing a four-year contract extension in 2021, Durant was ready to move on from the Nets franchise no less than a year later. Naturally, many now wonder how committed Durant would be to the franchise if and when adversity strikes again. According to Durant, his history should speak for itself: Nets fans should know me after three years. The work I put in — we've been through a lot and I still go out there and do my job. I don't feel like I have to prove anything to Net fans after three years. I'm committed to moving forward with this team, so if (Nets fans) got doubts, I can't control that, that's on you. "I'm committed to moving forward with this team. I just keep being me every day."- Kevin Durant on his future with the Nets pic.twitter.com/IDAeXNGQNN— Nets Videos (@SNYNets) With Durant back in the fold, the Nets have assembled a roster capable of making noise in the Eastern Conference. Kyrie Irving is once again eligible to play in all 82 games, Ben Simmons and Joe Harris will return to the lineup from injury, Seth Curry, Nic Claxton and Patty Mills will reprise their roles and newcomers Markieff Morris, Royce O'Neale and T.J. Warren stand to make an immediate impact. Durant's point to emphasize his commitment could be the first step toward Brooklyn making a deep run in the 2023 postseason.
Read full news…
More news