LeSean McCoy says of Eric Bieniemy: 'All he does is argue' 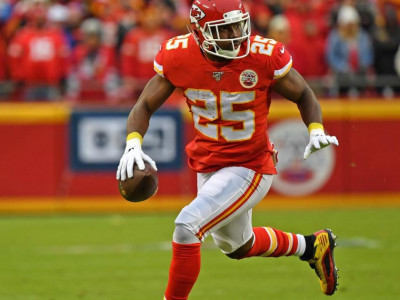 Former Chiefs running back LeSean McCoy has shared his insight in the brief spat between Kansas City quarterback Patrick Mahomes and offensive coordinator Eric Bieniemy. Spoiler: He was less than glowing in his summation of Bieniemy, particularly his communication skills. McCoy, who played for the team in 2019, claimed in an Instagram comment that his former offensive coordinator only knows how to argue with people, adding he doesn't know anything about play calling, Shady McCoy weighs in on EB😬😬 pic.twitter.com/Nq33xGnyDo— Braiden Turner (@bturner23) McCoy played 13 games in 2019 for the Chiefs, rushing 101 times for 465 yards (4.6 yards per carry) and four touchdowns. The 11,000-yard career rusher was used more as a role player in the Chiefs' offense. MORE: Patrick Mahomes, Andy Reid explain Chiefs' QB's heated argument with OC Eric Bienemy during Colts game Here's the brief clip of Mahomes and Bieniemy exchanging words at the half with Kansas City leading the Colts 14-10. Patrick Mahomes vs Eric Bienemy. Wow.pic.twitter.com/QmTz8swPk7— Dov Kleiman (@NFL_DovKleiman) Chiefs coach Andy Reid explained after the 20-17 loss that the exchange wasn't a significant confrontation — only that his quarterback wanted to attempt another scoring drive before the half instead of running the clock out. "He's a competitive kid. He wants to take advantage of every opportunity," Reid said. "Really, if you heard the words that were said, that wasn't ... I don't know how it looked to you guys, but there wasn't a confrontation at all. That's not what it was." MORE: How Matt Ammendola, Chiefs' special teams mistakes cost Kansas City in stunning loss vs. Colts Mahomes echoed Reid's assessment: "It was the (decision to) run cause I tried to go deep the first two times and obviously they were in a deep coverage and all I said was I was like, 'I'm not going to turn it over. I'll get it out, try to get it to the sideline and get us a chance to kick a field goal,' but I mean it's a tough situation," Mahomes said. "Me, I'm on the field, I'm playing I want to always try to go score, that's who I am, but that's their job is to make sure they manage the game the right way and we had multiple chances to win after that. We've just got to be better in the second half." McCoy has spoken out about his former offensive coordinator before, claiming that the way he speaks to players is a reason he hasn't got a head coaching job yet. MORE: NFL power rankings: Dolphins overtake Bills at No. 1 "Listen, because some players he talks to them a certain way and some players would take it," McCoy said in a May appearance on the "I Am Athlete" podcast. "I wouldn't take it, like 'Whoa.' "That's the reason why that every year they hype him up to get a job, and then when the time comes, nobody hires him because they know what type of coach he really is." Regardless of McCoy's thoughts on Bieniemy, it appears his summation of Sunday's spat wasn't entirely accurate.
Read full news…
More news