USMNT’s loss to Japan in a friendly was impossibly sad 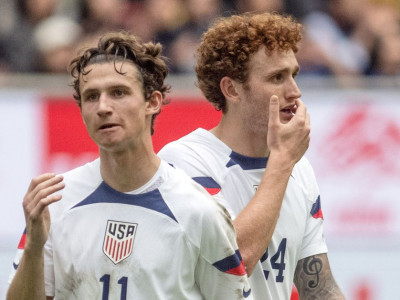 Are you hyped for the World Cup? After seeing the U.S. Men’s National Team on Friday you probably shouldn’t be! Sure, it was a friendly — but the USMNT played so poorly it’s almost impossible to comprehend how they only lost 2-0 to Japan.

Before we get to the nitty-gritty of how poorly the USMNT played, we have to start with these pre-match kits.

I’ve seen these described as “at least better than the World Cup kits,” which is settling for mediocrity. That is Stockholm Syndrome. These look like they were designed by Nerf for an episode of Nickelodeon Guts in 1994, then hastily threw a barely-visible Volkswagen logo on the front at the end, which looks like it was hand drawn on with Sharpie, because a kit manager forgot these were sponsored.

Somehow, these kits were still better than what the USMNT put on the field. Let’s dive into the sadness.

The USMNT lost possession 54 times in its defensive half in the first half against Japan, per the ESPN broadcast. pic.twitter.com/GfbrOteUS5— USMNT Only (@usmntonly)

This was in THE FIRST HALF! How do you lose 54 possessions in one half, let alone all in your defensive half? Keep in mind that according to FIFA the USMNT is the 14th ranked team in the world, while Japan is ranked 24th. Everyone had bad games, but not everyone on a team at once unless this is some sort of Twilight Zone marathon.

No matter, as bad as that stat looks when you read it, it still doesn’t compare to seeing a chart.

#USMNT first-half touches... The Pulisic-shaped hole is back! Japan had 82 attacking-third touches, to 42 for the U.S. pic.twitter.com/DTtOvq56SA— Paul Carr (@PaulCarr)

Japan secure a 2-0 win over the USMNT to kick off the international break pic.twitter.com/shduF3c28J— ESPN FC (@ESPNFC)

Somehow the USMNT managed to out-possess Japan 57-43, but stunningly didn’t manage to put a single shot on target in 90+ minutes. Not one. Before you think perhaps the U.S were sandbagging, maybe, but Japan was too. They were running the simplest, most rudimentary 4-4-2, and didn’t modify their tactics once during the match. They did the same press over, and over, and over again — and the USMNT didn’t have a single answer for how to deal with it.

If you’re looking for a silver lining (and you should be) it’s that the team was wracked with injuries, most notable to Christian Pulisic, who absolutely would have helped up the attack and distribution — but still, that’s not really an excuse for being beaten with what’s tantamount to a high school press from Japan.

The USMNT got bodied, plain and simple. They better do some major soul searching not to rock up in Qatar and go 0-3 and group, before letting the real teams keep playing.