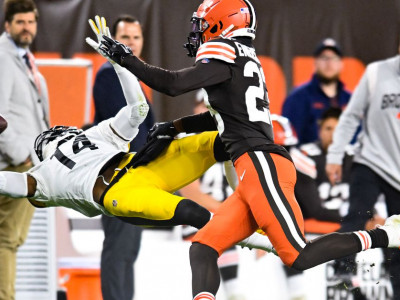 The Pittsburgh Steelers face Week 4 of the 2022 NFL season with a lot of questions to answer. Is Mitchell Trubisky being aggressive enough for the Steelers’ passing game? Is Trubisky even the answer? Is it time for Kenny Pickett to take over at quarterback? Is offensive coordinator Matt Canada long for his job?

One thing that should not be up for debate, however, is that rookie wide receiver George Pickens is the clubhouse leader in the “Catch of the Year” category.

Late in the first quarter, Trubisky was flushed from the pocket and decided to be aggressive, targeting Pickens down the right sideline with a deep throw. The pass required Pickens to make an adjustment, and he sure did:

The twisting, contorting, one-handed catch immediately broke the Internet, as it darn well should have. The NFL’s Twitter account quickly blasted out various angles of the catch, showing how Pickens adjusted his body to the throw before going horizontal to snare the pass one-handed:

Still can’t get over this catch by George Pickens #PITvsCLE on Prime VideoAlso available on NFL+ https://t.co/uF4okqrMww pic.twitter.com/wfnv5Vdtkt— NFL (@NFL)

The play also drew the attention of some of the other players around the league who were watching the game, including one of the NFL’s best wide receivers:

Of course, the catch quickly drew comparisons to another incredible reception, the one turned in by Odell Beckham Jr. while he was with the New York Giants:

The NFL even put out a poll asking which catch was better, won by Beckham:

We can leave that debate for another day — although for the record my vote went to Beckham’s catch — but what does seem clear is that Pickens has given us the Catch of the Year, and it is not yet October. How he managed to control his body, adjust to the throw and pull this in while going horizontal is the stuff of legends.

If something manages to top this, then we as football fans are in for a treat later this season.