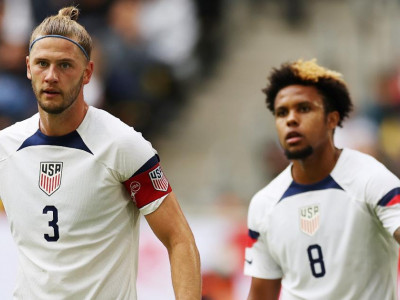 With the start of the 2022 World Cup just two months away, the USA approached the friendly match against Japan in Dusseldorf with an optimistic mindset. A jovial Weston McKennie and Tyler Adams joked with reporters just 20 hours prior, while manager Gregg Berhalter talked up the abilities of some of his last-minute roster replacements.

By the time the final whistle blew on a 2-0 defeat, USMNT supporters were instead filled with concern and doubt as the U.S. was soundly beaten by a fellow World Cup participant.

Japan fully deserved the 2-0 victory, confounding a USMNT squad that looked devoid of answers, leaving fans with numerous questions with the FIFA showcase just eight weeks away. For a young American team that should be heading into the World Cup with pomp and flair looking to turn around the failures of the 2018 cycle, they were left licking their wounds thanks to goals from Daichi Kamada and Kaoru Mitoma.

The USMNT will have another chance to quell the unrest with a match against Saudi Arabia on Tuesday, as Berhalter has plenty of issues to sort out before the USA take the field against Wales on November 21 in Qatar.

Despite all the negatives — of which there were plenty — one key for the USMNT in this September camp was to sort out the goalkeeper position. With a recent injury to Zack Steffen, the spot projects to be Matt Turner's to win or lose, despite his lack of playing time at Arsenal.

The No. 2 role at his club didn't seem to bother Turner one bit, as the former New England Revolution shot-stopper brought his 'A' game against Japan. While he conceded two goals, he made big saves to keep the deficit from ballooning further. Turner made six total saves, including a number of acrobatic stops that stymied bright Japanese attackers Daichi Kamada and Daizen Maeda, plus substitutes Ritsu Doan and Kaoru Mitoma.

The difference in this game, unquestionably, was the inability of the USMNT defenders and midfielders to deal with the Japan high press.

Deploying a relatively standard 4-4-2 formation, Japan pressed the U.S. into oblivion, not with exhausting pace that would have waned as the match went on, but instead with precision that forced the U.S. back and resulted in numerous embarrassing turnovers. Walker Zimmerman, Weston McKennie, and Luca de la Torre especially struggled with the pressure, as the three were rendered powerless in buildup.

The result of this was a starved U.S. attacking trio, as Jesus Ferreira, Gio Reyna, and Brenden Aaronson were effectively choked out of the match. It also produced turnovers in dangerous positions that left the U.S. scrambling to recover against a venomous Japan counter-attack.

The #USMNT conceded seven shots and no goals from high turnovers in 14 qualifying matches. Today in 90 minutes against Japan: pic.twitter.com/RVoQNfVz6c— The Analyst US (@OptaAnalystUS)

Berhalter seemed to temporarily seal the leak after halftime as he brought on Reggie Cannon and Mark McKenzie off the bench, but eventually they too fell victim to the Japanese tactical pressure.

With Japan providing the U.S. World Cup opponents with a blueprint on how to attack the Americans' possessional buildup, which proved effective against CONCACAF opposition throughout qualifying, Berhalter will need to patch up the holes quickly or a group stage exit will be on the cards.

There was no doubt that injuries played a concerning role in the U.S. defeat to Japan.

Already without starters Yunus Musah and Antonee "Jedi" Robinson as September camp began, news broke an hour before kickoff in Dusseldorf that talisman Christian Pulisic would miss the match after picking up a knock in training. Reports stated that Pulisic would have played had it been an important competitive match, but the U.S. were cautious for the friendly and sat the Chelsea forward.

Their absences were felt in a big way. Robinson's two-way abilities at left-back have been critical to Fulham's bright start to the Premier League season, and his replacement Sam Vines was incapable of replicating the same attacking flair that are supported by Jedi's improved one-on-one defensive abilities.

Additionally, Musah was sorely missed as Weston McKennie was forced into a ball carrier role that he's far less capable of handling than his usual box-to-box style.

Finally, the absence of Pulisic was massive. While the U.S. struggled to play any attackers into the game, the missing "personality" (as Berhalter put it in his post-match press conference) was clear without their best creative forward.