Establish the Fun: Talanoa Hufanga is a menace and other things to watch in Week 3 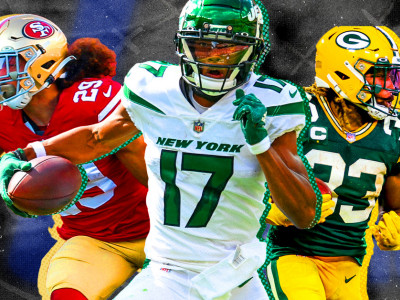 Welcome back to Establish the Fun, where football is fun and I would like to ... well ... establish that!

I’m still working on the intro, please be patient with me.

Week 2 gave us some amazing comebacks and insane wild, like the Tua renaissance game, the Jaguars simply owning the entire city of Indianapolis and the Justin Herbert “Put the team on his back like Greg Jennings in Madden” moment. All will probably make the video that explains what happened in the 2022 season by the end of the year.

However, we move on to Week 3, and with that, more cool things and cool players I enjoyed that you need to watch out for.

The San Francisco 49ers defense is a team full of menaces. Meaning, they just want to cause problems for every offense they play. All 11 guys play with their hair on fire and aren’t afraid to get a little dirty. They remind me of the Phantom Troupe from Hunter x Hunter, specifically in the Uvogin Requiem scene where they just destroy this entire city because their friend was killed by Kurapika.

Second year safety Talanoa Hufanga might be the most menaciest of all the menaces, however, and in 2022 he’s been one of the best safeties in the league. What I love the most about Hufanga is he just makes explosive plays happen for the defense. A defensive explosive play is a tackle for loss, sack or turnover.

The 49ers line Hufanga up everywhere, and in the modern NFL, having a 6’0, 200 pound safety who can be as versatile as Hufanga is critical in the workings of an effective defense. Let’s watch him go to work here. He’s lined up as the deep safety, but walks down when the Seahawks motion a receiver in to make it look like they’re running Duo. The receiver arc releases from Hufanga, and Seattle runs a boot off the run action. Hufanga simply just attacks the QB and forces a hurried throw and an incompletion:

Against the run, Hufanga has great instincts, combined with tackling ability and the desire to cause problems on purpose. Seattle tries to run split zone out of pistol, with the split action going away from Hufanga, but he comes flying in off the edge to get the tackle for loss. He just makes things happen, and it’s so fun to watch.

This came against the Bears in Week 1, but this was the play that got me out of my seat. The Bears motion the slot receiver to get Fred Warner, Niners MIKE and another menace, out of the box. This puts Hufanga, a safety, into the run fit, which is what you want as an offense. However, Hufanga is also a menace, and slips the block by the guard on Duo out of the gun to make a super impressive run stop.

His versatility doesn’t just stop in the run game. The Niners ask a lot of their safeties, to change rotations based on motion, switch responsibilities if personnel shifts and to do a lot of rotation post snap. Hufanga’s instincts in the run translate to the pass as well, where he also just blows shit up.

In this example, the 49ers are in Quarters coverage. The Seahawks motion a receiver from the opposite side as the ball is snapped, making Tyler Lockett, the receiver tight to the LOS, the new number 2 receiver. In this coverage, Hufanga matches any route by number 2, who runs a Bang 8 (rhythm post, often used with RPOs). This motion causes the LB to that side to widen, which opens the window for Geno Smith to make the throw to Lockett.

Hufanga comes from off the roof (from the top of the quarters coverage) and drives down on Lockett’s route, emphatically closing any window Smith had and causes an incompletion. He’s a good football player, man.

This interception is caused by Hufanga, once again just causing problems for the Seahawks passing offense. Seattle motions to empty which gives Hufanga the responsibility again of matching whatever route the second receiver runs. Hufanga undercuts the in-breaker, deflecting the pass right into the other safety’s hands for the INT.

Creating turnovers and just overall mucking things up for the offense is pivotal in defense now, and Hufanga has proven to be one of the best in the business at it. On Sunday night, the Niners play Denver, who will more than likely run a lot of play action and try to attack Hufanga’s eyes with misdirection. Watch out for this menace on Sunday Night Football.

Do we think Matt LaFleur and Aaron Rodgers love the song “Pony” by Ginuwine? I think so, because the Green Bay Packers abused the Chicago Bears on Sunday night with their Pony personnel.

Pony personnel is when there are two running backs in the formation, and the Packers have two very good backs in Aaron Jones and AJ Dillon, who have complementary skill sets. With the lack of depth at the receiver position, it makes sense that both would play at the same time.

However, Green Bay isn’t just throwing personnel out there just to do it; there’s a mindset and a method to the Pony madness.

Let’s watch this first play in the Pony package against the Bears. Green Bay motions the TE to the play side, probably to get rookie corner Kyler Gordon (who never really played nickel in college) into the run fit.

The Packers then attack the edges of the defense in what looks like crack toss action, where the TE who was motioned over cracks the playside EDGE player, and RT Elgton Jenkins pulls around him onto the edge. The way Rodgers hands the ball off to Jones is similar to plays the Niners would run with Deebo Samuel. Watch the backside LB’s eyes, though. He gets caught looking at AJ Dillon, who runs towards him. That slows him down and prevents him from getting to the play earlier.

On this next play, the Packers use Aaron Jones in motion to stretch the defense horizonally to create cutback lanes for AJ Dillon. Watch how Jones’ orbit motion makes the linebackers walk out further, and how far the distance is for the linebacker to come make the tackle. Deliberate things like these are used to create tiny advantages that can be the difference between two yards and six yards.

On this touchdown, Jones starts out off the ball but lined up as a wide receiver. He motions in and takes the jet sweep (which shouldn’t count as a pass) into the end zone, and he gets a great block from Dillon.

Chicago’s linebackers were dazed and confused on Sunday night, and Matthew McConaughey wasn’t even in the building. This is how calculated use of their personnel can make this offense dynamic on the ground. See the linebacker shift when the TE motions off the ball? They’re expecting the same outside play that was shown earlier, but instead gets a run with Dillon. Just nasty.

This passing play ends in a sack, but what I love the most here is the process behind them. Green Bay LOVES getting Aaron Jones vertical in the passing game out of the backfield, and they got the exact look the wanted from the Bears defense, which runs Cover 1 with a linebacker in the middle hole area.

The AJ Dillion fast (motion at the snap) motion gets the safety to nail down on Dillon, and they get Jones on a linebacker. The exact look you want, and one the Packers have exploited before. The Bears single safety at the top of the defense has to run with the deep over, and if Rodgers isn’t sacked, he probably gets a TD to Jones.

The Packers play the Buccaneers on Sunday, and they won’t win by just trying to hammer at that run defense like banging into a wall. If they can force the Bucs defense into mistakes with this personnel, and once again stretch their second level players horizontally, they should have a fighting chance on offense, without a true receiving threat.

The 2022 WR class in the NFL Draft wasn’t as dominant at the top as the 2021 rookies, but there are some high quality receivers that were picked. Some have adjusted to the NFL slower than the others, but the ones that you should watch out for based on their Week 2 performance are the Jets’ Garrett Wilson and the Falcons’ Drake London.

The first thing that stood out to me when I watched Wilson go for 102 yards and two touchdowns on eight catches is how sudden he is. He goes from stop to start—from slow to extremely fast—in the blink of an eye, and if you’re not ready, you’ll end up like Martin Emerson Jr. on this fade route for a touchdown:

His speed not only threatens defensive backs, but how quickly he can get in and out of breaks without giving off too much of a tell is also so impressive for a rookie. Watch how he turns Grant Delpit around on this out route. The head fake and three hard steps to the inside then exploding back out leaves Delpit in the dust.

Poor ol’ Jacob Phillips gets hit with Wilson’s ability to stop and start in the red zone, where the Jets run Wilson on a spot and go, which calls for Wilson to stop as if he’s running a spot route, then break upfield. A better throw and Wilson might’ve had a third touchdown.

What’s intriguing is how the Jets are putting him in favorable positions to succeed. Wilson isn’t the best at getting off of press yet, so New York is simply scheming him free looks and targets out of the slot or out of bunches and stacks. The Jets are in empty here, with Wilson out wide. The Jets motion Wilson into a tighter formation with the slot receiver to his side, ensuring that he won’t see press coverage and he can work against a slot defender, which is unfair to that defender.

The Jets play the Bengals on Sunday, who have a fine but unspectacular defense. Look for offensive coordinator Mike LaFleur to continue to scheme Wilson up targets where he can use his electrifying ability after the catch and body control to dice up underneath defenders.

London’s usage is a bit more interesting to me, mainly because I didn’t necessarily see him as the type of player they’re using him as, but it’s working!

Atlanta is using him a lot on smoke screens on their RPOs. If QB Marcus Mariota doesn’t like what he sees, he can throw it out to London, who has shown he can make guys miss. Per Sports Info Solutions, London leads all rookies in yards after the catch, and that’s for a reason. He’s a bigger guy, but he can move.