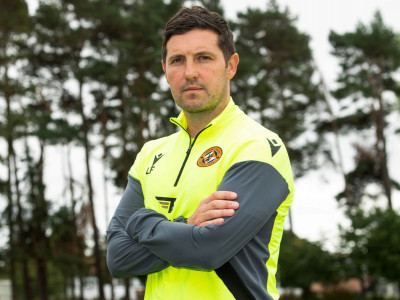 Liam Fox has been named as the new Dundee United head coach on a two-year deal.

Fox was assistant to Jack Ross, who was sacked at the end of August following the 9-0 defeat to Celtic, and has been in interim charge since, winning one of his three games at the helm.

The 38-year-old will be joined by former Dundee United striker and current East Fife manager Stevie Crawford as his assistant.

The Tannadice side are yet to win a game in the Scottish Premiership this season with Fox's first match as head coach at home to St Johnstone next weekend. The club sit bottom with two points from their first seven fixtures.

On his permanent appointment, Fox said: "I'm absolutely delighted to be given the opportunity to lead this outstanding football club. It's a massive honour and privilege and I want to thank Tony (Asghar, sporting director) and the board for their faith in me.

"I'm looking forward to putting a team on the park that the supporters can be proud of. We have made some small steps in the last few weeks and it's now about getting that winning feeling back.

"I'm also delighted to have Stevie on board as my assistant. He's a brilliant human being, a real football man and he has real experience in the game. He's been a manager and has worked at big clubs with big expectations.

"I've known Stevie a long time and I have enormous respect for him as a coach. He cares deeply about developing players and teams and will be a real asset to Dundee United."

Fox started his coaching career at Hearts in 2015, working in various roles at Tynecastle including as first-team coach and was assistant manager at Livingston before he joined United as assistant head coach in 2021. He also took charge of Cowdenbeath in 2016.

Dundee United's sporting director Tony Asghar added: "Liam was clear in his interview with the board on how he plans to improve short-term performance and results as he outlined a coaching and tactical plan to allow Dundee United to return to our long-term strategy.

"He was brought to the club as one of Scotland's best young football coaches and now it is his time to lead the team to success.

"It is also exciting to appoint Stevie Crawford as assistant head coach. Stevie has vast coaching experience and a strong track record of developing forward players in his previous roles.

"I have no doubt this coaching team will bring much-needed fresh and innovative coaching and game models to Dundee United."