Picks against the spread for every Week 4 Top 25 game 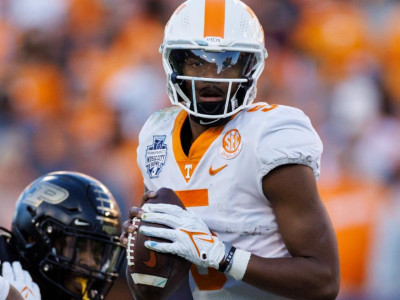 Week 4 of the college football season is already here, and a pair of SEC matchups highlights the AP Top 25 schedule.

No. 20 Florida travels to No. 10 Tennessee in a classic SEC East rivalry. The Gators have dominated the series, but the Volunteers are heavy favorites this time. It's also a prime quarterback matchup between Anthony Richardson and Hendon Hooker.

No. 10 Arkansas and No. 23 Texas A&M renew their SEC West rivalry at AT&T Stadium. The pressure is on the Aggies to avoid a second loss, and they are favored against the Razorbacks. New starter Max Johnson can lead Texas A&M to back-to-back victories against ranked teams, but Arkansas quarterback KJ Jefferson was the star of this matchup last season.

That game is in the prime-time window along with Wisconsin and No. 3 Ohio State. The Badgers will try to make a much-needed statement for the Big Ten West on the road.

Here is a look at our track record against the spread this season.

Here are our Week 4 predictions agains the spread:

This is a get-over-the-hump game for the Demon Deacons, who have lost the last 13 meetings against the Tigers. Clemson has been stop-and-start on offense, but the defense has allowed just 14.0 points per game through three games. Get the value on Clemson before the spread ticks up.

The home team has won the last four meetings, and three of those games have been decided by seven points or less. The Bears missed out on a chance to win a tough road game two weeks ago at BYU. The Cyclones will make it tough, but we'll stick with the ranked team. The Bears are 1-6 S/U as a road underdog, but we'll go against the trend and give the Bears a second chance. This could be a pick 'em by kickoff.

The Golden Flashes lost to Washington and Oklahoma by an average of 27.5 points per game, but the Bulldogs have allowed just one offensive TD in three games. Will the Bulldogs stay focused after last week's impressive SEC opener against South Carolina? Georgia is 2-5 ATS as a home favorite since 2020. Can the Golden Flashes sneak in a cover here?

Penn State crushes MAC opponents under James Franklin, and the last five victories were by an average of 40.8 points per game. It's tempting to take the Chippewas, who have scored 36.3 points per game through three weeks. Beware of the back-door cover here, but we'll trust that track record with Penn State.

Another big spread here, and a potential hangover game for the Hurricanes. Middle Tennessee State has picked up two victories the last two weeks, but they are the same team that lost 44-7 to James Madison in the opener. Miami bounces back from the Texas A&M loss with a crisp performance at home.

Who knows what to make of Florida? The up-and-down Gators revolve around Anthony Richardson, and they cannot turn the ball over against Tennessee – which is 3-0 ATS this season. This still is a hurdle game. Florida has won the last five meetings, and that double-digit line moved down.

Pick: Tennessee wins 35-28 but FAILS TO COVER the spread.

The Red Raiders have not beat the Longhorns in Lubbock since the legendary 39-33 shootout in 2008. Texas won 63-56 in 2020 and 70-35 last season. It's on the Red Raiders to keep up with the Bijan Robinson-led offense. Take the value with this spread being under a touchdown. The Longhorns win their Big 12 opener in style.

MORE: Bowl projections - Texas vs. Miami for all the Cheez-Its?

The Rebels rank fifth in the nation with a withering rushing attack that averages 271.7 yards per game. Lane Kiffin will lean on that at home against a Tulsa team that is better than advertised. Still, we like that running game at home. The Golden Hurricanes allowed 3.9 yards per carry. Will that hold up?

The Cougars have been one of the better early-season stories of the season around transfer quarterback Cameron Ward. The Ducks have won the last two meetings by 14 points and found their groove with Bo Nix in the victory against BYU in Week 3. We'll trust the Ducks on the road, but there will be some anxious moments in what could be a trendy upset pick.

MORE: Overlooked in high school, QB Cam Ward has his eye on the NFL

The Wildcats have been nasty on defense – allowing just 9.7 yards per game. Northern Illinois will be a challenge, but veteran quarterback Rocky Lombardi is questionable after suffering a leg injury against Vanderbilt. The Huskies must generate a rushing attack against that defense that allows 101.7 yards per game. Kentucky pulls away in the fourth quarter with the same no-nonsense formula.

Pick: Kentucky wins 35-10 and FAILS TO COVER the spread.

Texas A&M got back on track with the victory against Miami, but the Aggies must generate a running game against an Arkansas run defense that allows just 68.3 yards per game. KJ Jefferson was the difference-maker in this matchup last year, and he'll deliver the game-winning drive in a thriller.

This is another large spread. The Buckeyes' hammered Wisconsin 38-7 in their last visit to The Shoe in 2019. The Badgers have given up 8.0 points per game through three weeks, but they haven't faced an offense like this. The Buckeyes make a definitive statement in prime-time this time.

NC State can't afford to look ahead to the showdown against Clemson next week, even if quarterback Devin Leary should have the offense in cruise control by the second half against UConn. The Huskies are coming off a 59-0 loss at Michigan, but this spread still feels a little too high. The Huskies are 2-2 ATS.

The Commodores and Crimson Tide don't play often, but Alabama has won the last two meetings in 2011 and 2017 by a combined score of 93-0. Vanderbilt has improved under second-year coach Clark Lea, and the Crimson Tide have been plagued by penalties. Alabama has covered two 40-point spreads this season, and they do it again here.

The Sooners have re-asserted themselves as the team to beat in the Big 12, but Kansas State has played them tough under Chris Klieman. The Wildcats have won two of the last three meetings, and all of them have been decided by seven points or less. Kansas State, however, is coming off a loss to Tulane. This Oklahoma team with Brent Venables is different.

USC takes the show on the road again with an offense that averages 50.7 points per game. Oregon State (45.7 ppg.) can score too, and this could be the best “Pac-12 After Dark” game of Week 4. The Beavers routed the Trojans 45-27 last season, but there is a value in that half-point dip in the line.

The Cougars are coming off a brutal loss at Oregon. Wyoming hasn't won in Provo since 1987. The Cowboys have won three straight since a Week 0 loss at Illinois, and BYU might need a half to get rolling at home. This one plays out closer than expected.

The bottom has fallen out for the Sun Devils, who are coming off an embarrassing loss to Eastern Michigan and fired Herm Edwards. Arizona State won't come out flat, and that is a lot of points for a road favorite. Utah, however, has looked like a different team since the Week 1 loss to Florida. The Utes take care of business behind a running game that averages 216.7 yards per game, and they close it out with a fourth-quarter turnover.

The Huskies are riding the momentum off last week's huge victory against Michigan State, and now they open Pac-12 play against Stanford. The Cardinal had a bye week, and the last five meetings between these rivals have been decided by 10 points or less. Quarterback Michael Penix Jr. still leads another victory, but it will be late-night fun.

Pick: Washington wins 34-24 but FAILS TO COVER the spread.