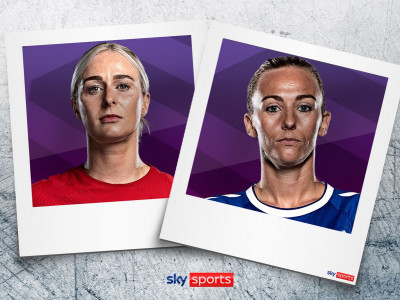 But nothing about beating reigning Women's Super League champions Chelsea is simple. Far from it.

Liverpool's much-anticipated WSL return was a head-turner, not least because Matt Beard's side had failed to get the better of Chelsea since 2014. Not only that, but the Blues had cruised to victory in each of their last nine league outings - the joint-longest ongoing run in the competition.

"Us as a team, we know we can compete in the Super League," Roberts exclusively told Sky Sports. "The aim was to get off to a good start. The result wasn't a shock to us.

"We've got the players and squad to do that to teams. A different result for other people, perhaps, but in our circle it wasn't.

"The girls have a great mindset. We work really hard on restarts and resets [when falling behind in games]. We were under the cosh after conceding but everyone just focused on the job at hand. We're in a really good place at the minute."

The Merseyside club are back in the top flight after a two-year hiatus, having dropped out of the WSL in 2020. It was a tumultuous chapter, defined by fractious relationships and insufficient support, as well as a global pandemic.

Even Jurgen Klopp has previously admitted that Liverpool FC was "not famous for treating women's football outstandingly well".

2022-23 marks a different era, though. Under Beard's steady leadership, the Reds have risen from the ashes stronger than ever before, as evidenced by last week's impressive Chelsea takedown.

But the result, eye-catching as it was, came as little surprise to Roberts after cruising emphatically to the Women's Championship crown last term - finishing 11 points clear of nearest competitor London City.

It initiated a new dawn for Liverpool Women. One that hopes to supersede many of those that went before it.

Could this be the campaign where the WSL witnesses its biggest hierarchical shake up? Roberts believes so.

"We want to inject pace into games. Off the back of the Euros, we're going to see higher attendances and we want to entertain. There's been a real progression in the women's game over the past couple of years.

"This season in particular the league is so competitive. Teams are going to take points off each other up and down the table.

"I don't think it should be a shock to see teams who are traditionally strong in the WSL losing out on points. It sends a message. Aston Villa also beat Man City on opening weekend.

"It's a really exciting start to the WSL and just shows how other clubs have caught up. It's 11 versus 11 on the pitch, with hard work and togetherness there is no reason why you can't strive to take three points from each game. That's our mentality."

Winning can be like currency in football terms. Often one victory can breed many more. For Roberts, a campaign littered with conquests such as the one just gone, has served as the perfect tonic for a club that had previously endured a period of isolation and hardship.

Liverpool have experienced somewhat of a rebirth. Once cast aside, the two-time WSL champions are now preparing for a Merseyside derby which will be staged on the hallowed Anfield turf. The buzz has returned and the appetite to compete has never been healthier, Roberts explains.

"Last season we got into the rhythm of winning. You can't replace the feeling of winning every week.

"Matt [Beard] always tell us, 'don't forget you're still champions'. It gives us a boost going into games. Hopefully we can create a bit of forward momentum now. Beating Chelsea gives us belief - it shows we can compete.

"Our success is built on togetherness. We've got good quality, but we've also got good people. That's helped create a positive environment for individuals to thrive.

"If you're happy off the pitch the majority of the time you're happy on it. That's when we've started to play our best football."

This weekend, more than just points are at stake. Pride is on the line. The Reds take on the blue half of Liverpool at Anfield, live on Sky Sports. It's a game that Roberts and her teammates have been drawn to since the minute fixture lists were released over the summer.

An occasion, brimming with opportunity, that tends to divide households in the same way the river Mersey cuts through the vastness of the northwest.

"It's the fixture that you look for," the defender said with a pang of excitement. "If playing a Merseyside derby at Anfield isn't fuel, I don't know what is. Everyone is buzzing. It's a big occasion.

"I played in the fixture in 2019 and it was unbelievable. The big crowd was amazing. We'd like as many people at Anfield as possible because we thrive off that. It makes a huge difference.

"I remember there being over 23,000 in the ground the last time we played Everton and it felt packed."

She added: "We want to be focussed. Soak in the occasion. But we want to pick up points, ultimately. We set ourselves targets for the first five games and then targets up until Christmas. We've got high standards.

"We're really looking forward to being under the lights, on a grass carpet, it's going to be incredible. Hopefully some tasty tackles in there - it is a derby after all."

Inside the WSL - Hosted by award-winning broadcaster and journalist Jessica Creighton, Inside the WSL is a comprehensive round-up of all things Barclays FA Women's Super League and women's football. Airing weekly on Sky Sports Premier League, the half-an-hour show will review and preview matches, including in-depth analysis and exclusive player interviews. Viewers can expect gripping behind-the-scenes access as well as a summary of all the action both on and off the pitch.

Sky Sports Social - Alongside coverage and visibility for the league across all Sky Sports' main social media channels, the bespoke Twitter channel @SkySportsWSL will continue to be the home of all Barclays FA WSL content on Sky Sports.

New to the 2022/23 season, the Sky Sports WSL TikTok account will be giving fans 360° coverage of the league and granting them exclusive access to their new favourite players. Also a first for the league, a new Snapchat Discover show The Dub aims to become the platform's new hub for Barclays' WSL content.

Sky Showcase - All Sky customers will benefit from being able to watch the opening weekend fixtures on Sky Showcase (channel 106) without a Sky Sports subscription. This channel is designed to curate some of the top shows, films and sports from across Sky's channels.

Sky Sports digital - Follow all the latest from the WSL across SkySports.com and app, including exclusive features and interviews, plus dedicated live blog coverage and in-game clips from games live on Sky Sports. You can watch free match highlights from every WSL game this season on Sky Sports' digital platforms and YouTube channel.