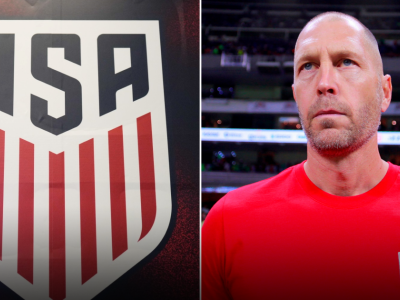 The United States men's national team is set to embark on its World Cup 2022 journey, and will have high hopes of making significant progress in Qatar after missing out on the 2018 tournament.

The 2022 event is something of a chance for redemption following the disappointment of four years ago. The USMNT finished fifth in the final group stage of CONCACAF qualifying to lose out. Now, head coach Gregg Berhalter will take his best 26 players to the Middle East with a mandate to seize the moment.

Led by Chelsea forward and national team talisman Christian Pulisic, the USMNT will hope to advance past the group stage and put on a show in the knockout rounds, but a draw with European sides England and Wales, plus Asian nation Iran, in Group B presents a significant challenge.

The Sporting News brings you all the information regarding when and where the United States will play, and how to watch the action at the 2022 World Cup.

MORE: FIFA World Cup 2022: Which teams have qualified for the Qatar finals?

The United States will begin its World Cup journey with potentially the most important match of the group stage, as the Stars & Stripes take on Wales. The game against Gareth Bale and company will likely prove critical in the journey towards trying to advance out of Group B, as the Dragons are predicted to be the fiercest competition for the U.S. in the battle for the coveted second qualifying spot.

Next up is a massive game against England on Black Friday, November 25, which will have Americans buzzing with hopes of capturing an enormous upset.

Finally, the U.S. will finish with a game against Iran, which is considered a must-win should Berhalter's side have any chance of reaching the knockout stage.

*Only in event of defeat in semifinals

*Only in event of defeat in semifinals

The USMNT was drawn into Group B alongside England, Wales and Iran. As a Pot 2 team, the United States were afforded a reasonable draw that brings an opportunity to advance to the knockout stage, but also one that could present challenges and pitfalls along the way.

England, one of the world's best teams, presents a chance for the United States to prove it belongs amongst the global soccer powers. Beyond that difficult matchup, Wales are a formidable opponent led by a world-class player in Bale. And finally, the draw was kind with Iran as a Pot 3 opponent, but as a nation ranked just outside the world's top 20 teams, they cannot be taken lightly.

The pre-tournament betting odds for the USMNT and the other Group B sides are below (odds via Ceasers).

The USMNT will open its World Cup schedule with a group-stage match against Wales on the second day of competition.

It's a critical match for the U.S. right out of the gates, as they face their likely fiercest competition in Group B for a second qualifying place in the knockout rounds.

The USMNT takes on Group B favorites England on Black Friday, November 25, with kickoff at 2:00 p.m. ET.

It's a monstrous matchup, as the United States looks to score a massive upset. England will be looking for revenge from their famous defeat to the U.S. in the 1950 World Cup.

The USMNT finishes Group B play against Iran on November 29, with kickoff at 2:00 p.m. ET.

Depending on previous results, the game will likely be a pivotal part of any potential advancement to the knockout stage for Gregg Berhalter and his squad.

The 2022 World Cup will be broadcast in the United States in English by Fox, with programming split between their main FOX network channel and their cable channel, FS1. The network will make all games available to stream on the Fox Sports app.

In the United States, games will also be available in Spanish on Telemundo, with select group-stage matches broadcast on Universo when there are kickoff conflicts.

Andres Cantor will serve as lead play-by-play broadcaster, set to cover his 12th World Cup. The studio programming will be anchored by Miguel Gurwitz, Ana Jurka, Carlos Hermosillo, and Carlota Vizmanos, who reprise their roles from the 2018 World Cup in Russia and the 2019 Women's World Cup in France.

Qatar resides in the Arabian Standard Time Zone, which is GMT +3.