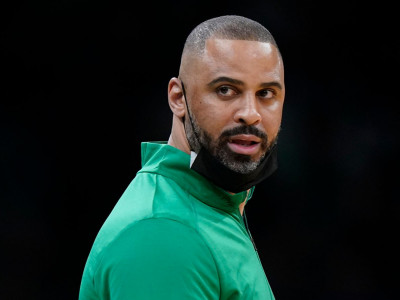 The Boston Celtics have suspended head coach Ime Udoka for the entire 2022-2023 season following a relationship with a female member of the team's staff.

It comes after Udoka led the Celtics to the NBA Finals in his first season in charge, with assistant Joe Mazzulla now set to take over as interim coach.

The Celtics stated that Udoka violated team policies and that a decision on his future beyond the upcoming season will be "made at a later date".

In a statement, Udoka said: "I want to apologise to our players, fans, the entire Celtics organisation, and my family for letting them down.

"I am sorry for putting the team in this difficult situation, and I accept the team's decision. Out of respect for everyone involved, I will have no further comment."

A longtime assistant in his first NBA head coaching job, Udoka led Boston to a 51-31 record last season - going 26-6 in the final 32 games. The Celtics beat Brooklyn, Milwaukee and Miami on the way to the NBA Finals, where they lost to the Golden State Warriors in six games.

The 45-year-old Udoka spent the bulk of his NBA playing career with San Antonio and then joined Spurs coach Gregg Popovich's staff as an assistant. Udoka was on the Spurs' staff from 2012 through 2019, winning it all in 2014, and he quickly found his way onto shortlists for open head coaching jobs.

He spent the 2019-20 season in Philadelphia and the 2020-21 season in Brooklyn before the Celtics hired him in June 2021 as the successor to Brad Stevens - who moved up to the front office. In Year One, Udoka finished fourth in coach of the year voting and the Celtics came within two wins of the championship.