Gareth Southgate: England must be completely ruthless from now until World Cup; FIFA yet to sanction 'OneLove' armband 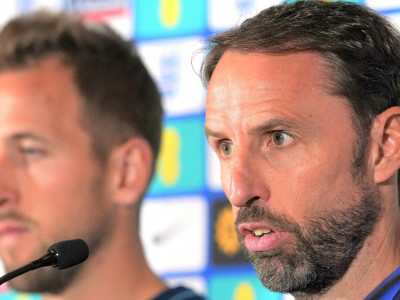 Gareth Southgate says England must be "completely ruthless" from here on out as World Cup preparations ramp up on the back of June's chastening Nations League results.

England are in Milan to take on Euro 2020 final foes Italy on Friday evening knowing defeat will see them relegated from the top tier of the Nations League.

It would be an embarrassing moment and another difficult bump in the road for one of the World Cup favourites in their penultimate match before the tournament.

Southgate's side are determined to get back to winning ways on Friday as they return to action for the first time since some fans called for the manager's head during the humiliating 4-0 home loss to Hungary.

"Well the individual part is not important," the England boss said of the stick he faced. "We analysed everything, every department.

"I think when you're winning... we were on a run going into that summer of 22 matches without losing and you maybe don't analyse the victories quite as acutely as you analyse the defeats.

"That's probably not the right approach in actual fact.

Which England players are giving Southgate a headache as World Cup dawns?

"But I felt I compromised certain decisions internally, and you don't win if you compromise.

"It was good for me to sharpen that focus again because what we're going into we've got to be completely ruthless and I've got to create an environment for the players that allows them to excel.

"And to provide them with the best platform to be at the level they've been for the last five or six years."

Asked what the compromises were, Southgate said: "No, because they're internal things that we're working on as a team, so there's no need for that to be public."

John Stones is suspended for the Nations League game with Italy, following his red card against Hungary last time out. Jordan Henderson is unlikely be involved in Milan, with the Liverpool skipper returning to fitness, but could feature against Germany on Monday. The rest of the squad trained as normal on Thursday.

Defeats to Hungary bookended a miserable four-game slog in June, with the 1-0 loss in Budapest followed by draws in Germany and behind closed doors against the Azzurri.

But the 4-0 Molineux mauling was the crushing blow that leaves them at a crossroads with the World Cup just 60 days away.

"I'm not really sure it's about form because when you're in an international environment, there's so many weeks and months between games that you're starting from scratch every time, really," Southgate said.

"There were so many circumstances in the summer with, firstly, high-quality games, high-quality opponents, but also the need to look after some of our big players.

"I think every nation did that. Talking to the managers of Denmark, Belgium and France over the summer, they all found that challenging because they're all thinking about the World Cup as well.

"Also players that we wanted to see more of because there's no friendlies after this, which you'd normally have for a tournament.

"Two games behind closed doors, so any number of reasons but also we reflected and dissected everything as a group of staff.

"When you've been through [challenging] spells as a manager, which I have, that helps you because you've got real clarity on what needs to happen and how to come through those periods.

"Also, I think if we were coming out of those matches wondering why things hadn't gone quite so well, then that would be more of a concern.

"But we knew exactly the reasons and it's a challenge for us as a group of staff and then ultimately for us to put that challenge to the players to respond.

"We know the level of performance needs to be incredibly high to achieve what we want to achieve in in the World Cup."

John Stones' red card against Hungary means he is suspended for the San Siro trip.

Liverpool captain Jordan Henderson came into the squad due to an injury to Kalvin Phillips but Southgate says the plan was always for him to be involved against Germany on Monday rather than Italy.

"Great tests for us, great games to be involved with first of all," Southgate said of the Group A3 double-header.

"We play two of the strongest football nations historically in two of the most iconic stadiums you can play in, so great tests for us.

"We're wanting to of course improve our performances from the summer and to leave the camp feeling good about ourselves going into the World Cup.

"To come here and play Italy in Milan is a great opportunity to do that."

Sky Sports News has confirmed that FIFA is yet to sanction England's use of the 'OneLove' rainbow armband at the World Cup in Qatar.

The FA announced on Wednesday that England - along with nine other European nations taking part in the World Cup - will wear a rainbow captain's armband during the tournament as part of an anti-discrimination initiative, and in support of the LGBTQ+ community.

Same-sex relationships are illegal in Qatar, although tournament organisers have confirmed that gay fans attending the World Cup will be free to book hotel rooms together, and will not be criminalised, for example, for holding hands in the street.

Both Stonewall and Amnesty have welcomed the stance taken by the FA.

The original idea for the rainbow armband came from the Netherlands national team, who plan to make the symbolic gesture alongside other nations including England, Wales, Germany and France.

But FIFA hasn't yet given permission for the rainbow armband to be worn.

The world governing body has told Sky Sports News: "FIFA confirms it has received requests from member associations in relation to the World Cup 2022 and will respond to them in due course."

FIFA and UEFA both take a strict stance on the use of political imagery in football.

Law 4 of FIFA's Laws of the Game states: "Equipment must not have any political, religious or personal slogans, statements or images.

"The team of a player whose basic compulsory equipment (of which the captain's armband is one) has political, religious or personal slogans, statements or images will be sanctioned."

The FA and other European nations are, however, confident the use of the rainbow armband is not in breach of FIFA's rules.

England captain Harry Kane and head coach Southgate have backed the 'OneLove' anti-discrimination campaign but accepted it will have a limited impact in Qatar.

Kane will pull on that armband for the first time in England's Nations League tie with Italy at the San Siro on Friday night.

Asked about the impact the campaign could realistically have in Qatar, given the country's human rights record, Kane said on Thursday: "There is only so much the players can actually do and wearing the armband on the biggest stage in the world will have an impact.

"But we can only do what we can. We have definitely taken a step forward to help some of the issues in Qatar."

Kane revealed he had spoken to former team-mate and Denmark captain Christian Eriksen and his current Tottenham colleague Hugo Lloris, who captains France, about the campaign.

It has been launched just a couple of months before the World Cup kicks off in Qatar, where a spotlight has been shone on the treatment of migrant workers and where Kick It Out says there is a "risk" for LGBTQ+ fans and players who may wish to travel to the Gulf state for the tournament due to homosexuality being criminalised in the country.

Asked about the campaign, England boss Gareth Southgate added: "There is not a lot more the players in particular can do other than talk about those issues and put them on the table because in the end, we are asking for change in a country we are respectful of, has made progress, but don't have any control over."

Southgate continued: "We've done a lot of research, the FA have had countless meetings with NGOs, migrant workers in Qatar, they've gathered all the information and requests of people affected. There's a limit to what can be achieved.

"Talking about the issues and raising the issues and putting them on the table is the vehicle that people involved in sport we've used in the past and it is what we're trying to do this time.

"There will always be criticism, whatever you do but we're trying to affect the areas we've been asked to affect. Unless other ideas come forward and other requests that we think are suitable are on the table, then it's difficult to do more than we've been asked."